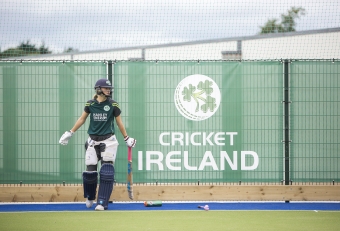 The Performance squad consists of 16 players that form the nucleus of the Ireland Women’s senior squad, while the Shapoorji Pallonji Academy squad consists of emerging players who are part of a comprehensive training and fitness programme that forms a key part of the performance pathway for aspiring women cricketers.

“We’re heading into another big year for women’s cricket in Ireland, with a 50-over world cup qualifying campaign mid-year to build towards. While we’re in the off-season domestically, it has been a busy winter for many of the players, with a number of the senior squad playing club cricket in Australia, while others have been undertaking indoor skills sessions, as well as fitness and nutrition programmes.”

“One of our challenges is working with a wide number of players who are balancing their training and playing schedules with work or studies. While we are fortunate to get plenty of contact hours with the six contracted players, the amount of time and commitment the women put into their preparation and training programmes is an aspect of being a cricketer at this level that the public often under-appreciate. What I have seen to date, however, is a dedicated young squad that is keen to learn and progress. That is exciting for the future and will hopefully be rewarded by some good performances over the next 12 months.”

“This was my first experience being part of selecting squads and there were certainly some tough decisions in there. The Performance Squad is mostly made up of players that were heavily involved last summer with the national side, both in the West Indies series and in the T20 World Cup qualifiers. This was, of course, a very young side after the retirement of several senior players earlier in the year. Many of these players have moved up from the Academy Squad and this shows that you don’t necessarily have to be in the Performance Squad to get national recognition.”

“The Academy was selected based on a few criteria. The majority of the squad are players that are very close to the Performance squad and we consider close to national selection. We also included some exciting under-19 players that we think will really benefit from extra training, with an eye on a potential Under-19 World Cup in 2021.”