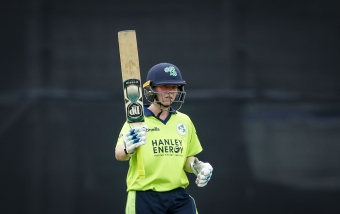 Laura Delany will lead the squad to the Qualifier tournament

DUBLIN – Cricket Ireland has today announced a 14-player Ireland Women’s squad for the upcoming ICC T20 World Cup European Qualifier in Spain – the tournament to be played between 26-31 August 2021.

Laura Delany will lead the side after recently surpassing Isobel Joyce for most matches captained for Ireland Women.

The qualifier will be played at La Manga Club in Spain in a round-robin format, with just the top team of the six participating countries progressing to the 2022 ICC Women’s World T20 Qualifier tournament.

The matches will be livestreamed and livescored via the ICC website.

Ireland Women are currently ranked 10th in the world in T20 cricket, and had successfully completed home series wins against Scotland and Netherlands this summer.

“The selectors have had an extremely challenging selection process for the Qualifier – but, in a way, it was a pleasing challenge to have. The quality and increasing depth of our playing talent in Ireland means that there was increased competition for places, and with only 14 players travelling per squad, tough choices had to be made.”

“We are pleased with the squad we’ve selected, however, there were several players that have missed out. Our key message is that hard work and commitment never goes unnoticed. With this being such an important year for Women’s cricket in Ireland, there will be future opportunities to push for selection in coming months. This is not the only qualifying tournament that we will be playing this year, and we will be keeping an eye out for those striving to secure their place for future series.”

“What stood out to us during our selection deliberations is that, although this is a relatively young squad, we not only have all bases covered, but we have a squad with both batting and bowling depth. That depth will be crucially important in this incredibly important and intense tournament. Providing Head Coach Ed Joyce and captain Laura Delany with options was our main goal.”

“The selectors wish Ed, Laura and the squad well both in the lead up and in the Qualifiers themselves.”

“We’ve had a decent preparation period with the squad – the Super Series, the match against Lancashire and the Netherlands series have all allowed us the opportunity to hone our tactics and help shape the roles each member of the squad will be expected to play. We’ll spend the next 10 days or so getting final preparations in place, but most of the hard work and planning has already been done, so it’s a case of trusting our abilities and executing our plans out on the field.”

“With only one side going through from here, it will be a challenging week - but what’s definitely pleasing for me is that I was confident no matter which 14 players were selected, will be taking a talented, eager and hungry group to Spain that are capable of competing on all fronts.”