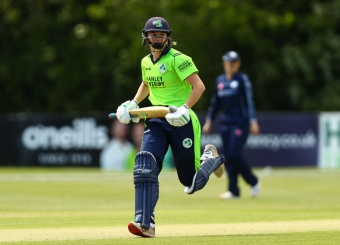 Gaby Lewis will lead the international side for the first time

DUBLIN – Selectors have today named a 14-player Ireland Women squad who will take on South Africa Women in a six-match multi-format series in Dublin next month, with four uncapped players potentially looking to make their international debuts.

As a result of injuries and player unavailability (primarily due to school/college exams), head coach Ed Joyce is without nine of his 20 senior performance squad members for the series, with selectors opting to bring in four possible debutants, including New Zealand-born Arlene Kelly (see background). Kelly, 28, who plays for Auckland Hearts in New Zealand, is an Irish passport-holder who recently relocated to Ireland to pursue cricket opportunities. She has featured for the Dragons in the early stages of the Arachas Super Series, claiming Player of the Match honours on debut after scoring 60 and taking 3-35 against the Typhoons at Lisburn.

In the absence of regular captain Laura Delany (recovering from injury), Gaby Lewis will lead the international side for the first time. While still only 21, Lewis has amassed 88 caps so far and is Ireland Women’s fifth-highest run-scorer across all formats. She also becomes the first daughter of a former Irish cricket captain to lead her country, following in the footsteps of her father Alan Lewis who led Ireland Men 35 times. The Ireland Women’s squad for the T20Is and ODIs against South Africa is:

“Despite the introduction of contracts, we have a large portion of this year’s performance squad in education and completing important exams at the time of this series. In addition, Eimear Richardson was unavailable for this series and a number of key players are rehabilitating from injuries, including Laura Delany, Rebecca Stokell, Orla Prendergast and Hannah Little. With the long-term in mind, particularly with the significant volume of international cricket ahead, we believe that it was more important to adhere to player’s treatment plans than to try and rush them back.

“When selecting squads, the Selectors seek to maintain a balance between the immediate needs and priorities with long-term planning. We’ve selected a 14-player squad that features five players who will potentially make debuts. We are excited about the inclusion of these potential debutants, but at the same time acknowledge that there’s a lot of years of experience missing.

“We will be facing one of the world’s top-ranked teams, and this is our first outing in the ICC Championship. While the selectors had met a number of weeks ago to confirm the squad, the further injury to Orla Prendergast forced us to consider options that would maintain our competitiveness on the field. As such, despite only recently arriving in Ireland, we have included Arlene Kelly for this series. Arlene brings a wealth of experience and adds depth to the squad as an all-rounder. Her immediate impact upon the Arachas Super Series demonstrated her talent and as an Irish passport-holder she is available to declare for Ireland immediately.

“Despite the challenges, the squad will still feature a number of senior players who have a wealth of experience – Gaby Lewis, Shauna Kavanagh and Mary Waldron have 335 caps between them. We wish Gaby and her team the best for the challenge ahead and have no doubt under Ed Joyce’s leadership they will have prepared meticulously.”

“While it’s unfortunate that we are without our skipper Laura Delany, it’s an absolute honour to be asked to captain Ireland for the first time. The opportunity to take on one of the world’s leading sides is one I am relishing, and I know the squad is looking forward to the challenge. One of the benefits of a competitive domestic Super Series is that – even with up to nine players missing - we are still able to bring in a talented group of players as cover, showing that we are growing our player pool and developing our emerging talent in the right way.”

The series dates are:

The three ODIs will be Ireland Women’s first fixtures as part of the ICC Women’s Championship.

All matches will be livestreamed and available at www.livestream.com/CricketIrelandLive.

Tickets to the matches are €5 adults, under-16s go free, with online ticket sales at: www.cricketireland.ie/tickets.