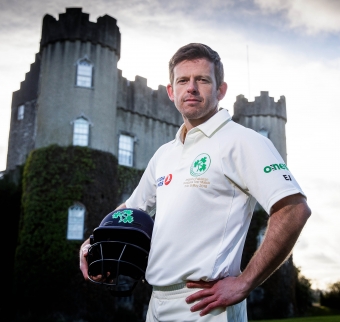 Cricket Ireland and Sussex Cricket have today confirmed that they will honour the long-service and career achievements of one of their most successful players, Dublin-born Ed Joyce, by playing a T20 match between Sussex Sharks and an Ireland XI at Arundel Castle on Sunday 24 June 2018.

The match is part of the Ed Joyce Testimonial Year programme, an honour bestowed on him by Sussex Cricket to recognise his service to the county side that he played for from 2009 to 2016, and captained from mid-2012 to 2015.

“Ed has been a fantastic servant to Irish cricket since his arrival on the international scene in 2006. Not only is he a one of the most talented and hard-working batsman we have ever seen pull on the Irish shirt, he is a great ambassador for the sport off the field,” said Richard Holdsworth, Performance Director at Cricket Ireland.

“Of course, we know Ed’s story so well – a dual international who represented both Ireland and England at an elite level - but what the Irish public may not be as aware of is his record of achievement and reputation in the English county game. That Sussex Cricket are honouring an Irish cricketer with a testimonial year goes some way to indicating the esteem that Ed is held in.”

Rob Andrew, Sussex Cricket Chief Executive, added: “We’re absolutely delighted to be able to support Ed’s testimonial by taking part in this historic T20 in the beautiful setting of the Arundel Castle ground.”

“Thanks to his performances as a batsman and leadership as captain, Ed is quite rightly regarded as a Sussex legend. This match will be a fitting way for the club’s supporters to celebrate Ed’s achievements and help raise money for the PCA Benevolent Fund and Sussex Cricket Foundation, the two charities Ed has chosen to support through his testimonial.”

The T20 match on Sunday 24 June 2018 will be played at the Arundel Castle Cricket Ground in West Sussex, and is ideally timed as part of Ireland Men’s teams’ preparations for the important two-match T20I series against India in Dublin (27 and 29 June 2018).

“We jumped at the chance to take on Sussex as a warm-up match before the India series. This additional match enhances the preparations we have in place before we take on one of the world’s best sides in Dublin at the end of June,” said Holdsworth.

Joyce, currently on tour as part of Ireland’s campaign to qualify for the Cricket World Cup in 2019, said he was honoured to be recognised in this way and looked forward to leading out an Irish Eleven against Sussex.

“I definitely played my best cricket at Sussex and am very grateful to all the players, coaches and supporters who firstly welcomed me to the club, and then also helped bring the best out of my game,” said Joyce.

“To have played First-class cricket for 20 years and to have represented my nation at an international level for the last 12 years has been a tremendous journey, and with Ireland and Sussex coming together for this match is truly humbling.”

Full details of Ed’s testimonial year are available at: http://edjoyce2018.co.uk/. Tickets for the match are now available online at: https://www.eventbrite.co.uk/e/sussex-sharks-v-ireland-t20-tickets-43303289304.