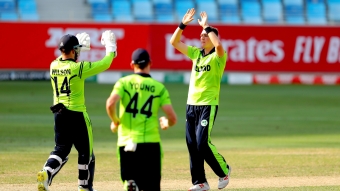 Ireland captain Gary Wilson won the toss and chose to bat first on a hard wicket that looked good for batting. Two changes were made from the loss yesterday to the Netherlands, with Shane Getkate and Simi Singh coming into the side in place of Stuart Thompson and George Dockrell.

Paul Stirling (25) and Kevin O’Brien (17) started sprightly, but both fell to catches in the outfield when beginning to look dangerous. During his innings, O’Brien registered his 1,500th career run in T20 Internationals. Stirling and O’Brien also finish their year in first and second spot for most runs in T20Is in a calendar year for any country.

And with that 13th run today, Kevin O'Brien brings up another great milestone.

Andy Balbirnie looked in control of his innings and appeared comfortable picking off runs with the odd boundary, but off the last ball of the 15th over he top-edged a pull shot and was caught at backward square leg for 46 from 35 balls.

Mark Adair (17), with two consecutive sixes down the ground, gave Ireland’s total a late boost, but wickets tumbled and Ireland were bowled out in the last over for 135. Needing a good start to defend a total 20-25 runs below par, Gareth Delany (2-23) struck in the second over, quickly followed by Simi Singh (3-25) in his first appearance at the Qualifier tournament. Singh’s dismissal will undoubtedly be on a shortlist of catches of the tournament, grabbing a reflex, diving caught and bowled opportunity to have Namibia at 11-2 in the fourth over.

Delany struck again with, perhaps, a fortunate LBW decision before Stephen Baard (17) and captain Gerhard Erasmus (51) stabilised the innings with a promising 22-run stand. However, having done the hard work Baard pulled Shane Getkate high into and Singh once again claimed an eye-catching catch, this time in the outfield.

Namibian captain Erasmus tried to wrestle control of the match away from the Irish bowlers with a powerful half-century, but after passing the milestone he was caught scooping a ball to Boyd Rankin at short fine leg.

With the Namibian captain’s dismissal the African team’s resistance failed and Ireland’s bowlers turned the screws with tight bowling and regular wickets. Namibia were eventually bowled out for 108 in the 19th over, handing Ireland a 27-run win. Ireland finishes in 3rd Place at the ICC Men’s T20 World Cup tournament, having earlier earned qualification for the T20 World Cup in Australia in October-November 2020.

After the match, Player of the Match Simi Singh said:

“First of all I’m delighted with the win today, and the team’s performance with the ball. It was great to get a game and show people what I can do.”

“It was definitely a day for pace of the ball, I looked at the wicket and saw how our batters struggled a little with the pace off the ball, so that was the plan for me.”

“It’s great now to finish with a win and go home with a smile on our face – and maybe a few beers.”

“As I said before the toss it wasn’t the game we wanted to be playing but it’s nice to sign off with a good performance and a win.”

“I thought we were about par on that wicket, maybe just a little below – we found the wickets tough out here and the way Gerhard [Erasmus] played out there, that’s probably as good as I’ve seen anyone play out there in the middle overs. We were always confident that we had about enough if we bowled well, and it worked out that way.”

“We’ve had some new faces and some big changes, and that’s what often happens when you make such big changes – you’re going to be up one day and maybe down the next and I think it’s probably reflective of where we are as a team at the minute. We probably didn’t deserve to be in the final, but I do think that when we play our best cricket we’re a match for anyone.”