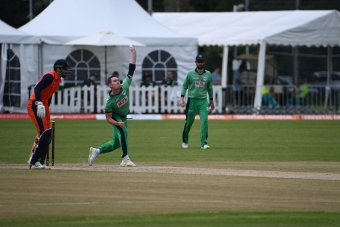 After winning the toss and opting to bat for the second game in a row, the Dutch side made a solid start with openers Stephen Myburgh and Max O’Dowd negotiating some uneven bounce early. The pair put on 44 for the first wicket before Josh Little once again changed the fortunes of the game.

Bowling at a consistent speed of just under 90 miles per hour (144 kmh), Little firstly cramped up Myburgh (11) and induced him to play the ball on, then the next ball had Ben Cooper edging through to the keeper for a first-ball duck. Changing angles and coming around the wicket to O’Dowd (36), Little then beat the Dutch opener for pace and knocked back his off stump.

After a brief partnership of 27 between captain Pieter Seelaar (11) and Bas de Leede (23), both players found themselves back in the pavilion within the space of four balls and Netherlands found themselves at 85-5 in the 28th over.

Saq Zulfiqar, taking on a quick single to Harry Tector at mid-wicket, pulled a hamstring in the run and had to retire hurt, while the tail eked out late runs, Netherlands were eventually all out for 157.

Stuart Barnes, the Irish bowling coach, will be delighted with Ireland’s performance with the ball today, led by Craig Young (4-18) and Josh Little (4-39), well supported by Andy McBrine (1-28) and Barry McCarthy (1-33) who both bowled tight lines and with good control.

In response, Ireland lost William Porterfield for a duck, but Paul Stirling (52) and Andrew Balbirnie (63*) put on an 82-run stand to put Ireland well and truly in the driver’s seat. The pair looked comfortable at the crease throughout, with the pitch seeming to play with more consistent bounce as the day went on. Stirring brought up his half-century from 61 balls, but fell soon after miscuing a ball to mid-on.

During today’s innings Stirling became the first batter in world cricket to pass 500 runs in ODI cricket in 2021 - having scored 541 runs since January at an incredible average of 90.16, with three centuries and two fifties.

Josh Little was named Player of the Match, and has taken seven wickets at an average of 10.14 this series – and just as impressively at an economy rate of 3.55 runs per over.

But bowling plaudits in the series have to be shared with the in-form Craig Young. The red-haired paceman has also claimed seven wickets, but at an incredible average of just 7.43. Where Little’s pace and bounce are causing batters trouble, Young’s control and movement has made him near impossible to dominate, and his 4-18 today was his second-best return in ODIs following his 5-46 on ODI debut back in 2014.

The two sides will return to the same ground for the third and final ODI of the series on Monday.

Josh Little was after the game how he had raised his game up a level from the series against Afghanistan in January:

“Having a little injury back a few months ago forced a turnaround for me – I had to get back to fitness quickly and I worked a lot with Stuart Barnes over the last couple of months, which has propelled me a bit quicker into the summer than previous years. I’m just happy we got the win today and everything clicked for us.”

“Since January I’ve lost a bit of weight, and got a bit fitter and stronger – the ball also seems to be coming out a bit quicker which has meant my role has changed to a more aggressive, ‘hit the pitch’ bowler, rather than looking at cutters and tying batters up.”

“There was obviously huge disappointment the other day – we were all gutted, so we really wanted to come out today and put on a clinical performance. We’ll rest up over the next day, have a good training session on Sunday then hopefully come out again on Monday looking for the win.”

Andrew Balbirnie said after the game:

“Having lost the toss, I thought we bowled really well and the chase was a lot more composed than the other day. This time someone was out there to bat with Paul and build a partnership that went a long way to winning the game. The bowlers are in a good spot at the moment, and it was great as a batting group that we could see it over the line today.”

“We spoke as a batting group that the best way to get going on that wicket was to spend as much time out there as you can. Chasing low totals can give you that extra bit of time, and today it worked for me – I haven’t been in great form over the last few games. But to get in there and support Paul, and get through to the win with Harry there is satisfying – but it’s only one game.”

“[Paul] is in incredible form – he’s absolutely leading this batting lineup. And that’s what has been so disappointing over the last few games, that there hasn’t been anyone there to support him. Fortunately for me, I was there today – hopefully next time it can be someone else. He’s a world-class player, and he’s just so important to what we’re trying to do.”

“We certainly bowled better today. They put a bit of moisture in the wicket and we were unsure if that might play a bit better with the bat or it would do more with the ball. I think both teams were a bit uncertain about how the wicket would play, but we certainly bowled in better areas and got the rewards today. I thought our spinners bowled with great control and we finished it off well at the end. It’s what we didn’t do the other day – so to keep them to less than 160 then chase it with only two down is a fairly complete performance on a very difficult wicket.”