Ireland’s bowlers swing the game in tight win against Nepal 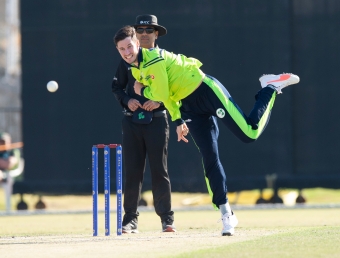 George Dockrell bowled Ireland back into the game

MUSCAT, Oman – Ireland’s bowlers - led by George Dockrell and Mark Adair who claimed three wickets apiece - have led their side to a 13-run victory in a close match against Nepal at the Al Amerat Cricket Ground in Muscat.

For the fourth match in a row, Ireland captain Gary Wilson won the toss – this time choosing to bat first. Despite losing the in-form Kevin O’Brien early, Paul Stirling (59) and Andy Balbirnie (38) got Ireland off to a blistering start. The pair put on 88 runs in 59 balls, punishing anything short and playing lofted shots down the ground when the Nepalese bowlers over-pitched.

Looking set for a big total at 95-1 in the 12th over, a collapse saw Ireland ominously lose 7-29 – the Nepal bowling attack using variation of pace and length to great effect. The 19-year old leg spinner Sandeep Lamichhane leading the way with 2-22, matched by medium-pacer Abinash Bohara who also finished with a tight 2-22.

The Irish total was given a late boost via a cameo innings by Stuart Thompson who scored 21* from 11 balls, which included two big sixes, but the final score of 145-8 was well below what would have been expected after the rapid start.

END OF INNINGS: Ireland finishes with 145-8.

A great cameo at the end by @SRThompson91 with 21* from 11 balls, including two sixes.

In response, Nepal’s top order batters made steady and confident progress early with Ishan Pandey (22), captain Paras Khadka (25) and Aarif Sheikh (26) setting a solid platform. With the score at 73-1 in the 10th over, and the Nepalese looking comfortable, a combination of excellent fielding and tight, spin bowling in the middle overs by Dockrell and Simi Singh pulled the Nepal batters back and began to build pressure.

As the run rate required grew steadily higher, wickets began to fall. Dockrell’s economical bowling was rewarded with wickets (3-23) and Mark Adair again showed his knack of taking important scalps and finished with (3-22), and also effected an athletic run out off his own bowling. In support, Irish fans will be pleased to once again see 22-year old leg spinner Gareth Delany bowl confidently, taking 2-30 from his four overs.

In the end, the crucial late runs scored by Thompson at the end of the Irish innings proved the difference, and Nepal were all out in their final over for 132.

While the Irish batting today did not fire as hoped, Head Coach Graham Ford will be pleased that his bowlers stood up under pressure, and the fielding and catching was almost without blemish. Such experience will be important heading into the ICC T20 World Cup Qualifier, which starts on 18 October 2019 where they will play Hong Kong in the first Group Stage match.

The Irish squad now has a rest day after completing their matches in the Pentangular T20I Series in Oman. They then move to Abu Dhabi on Thursday ahead of the start of the Qualifier.

The current series currently sees Ireland sitting at the top of the table, however, need some favourable results elsewhere to claim the series title.