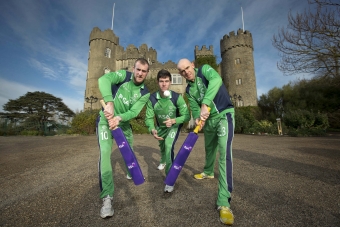 Phil Simmons is confident Ireland’s cricketers can record another famous victory over their closest neighbours when they do battle with England on Tuesday September 3rd.

Speaking at the ticket launch for next year’s RSA Challenge held today at Malahide Castle, the 49 year old spoke of the progress Irish cricket has made since he took charge in 2007 and his excitement with the launch of the new international venue in Malahide.

“There’s a new belief in Irish cricket and that comes from the confidence the players have from beating teams like England. There’s no doubt in my mind that the result in Bangalore brought home to the squad that they belong at the elite level.

“The professionalism on the field has been matched by events off it, and the new international venue at Malahide is going to be a fantastic resource for both the players and the fans. It’s bound to be a magnificent occasion as we take on England, and I’m sure the fans will once again come out in large numbers to support the team.”

The RSA Challenge will be the biggest cricket match ever to be held in Ireland, with the new Malahide all-seater venue being able to host a higher capacity than has ever been seen on the island of Ireland for an international cricket match.

Ireland will be hoping their new venue sees a change in luck in their home clashes against the auld enemy, having lost the three previous encounters on Irish soil narrowly by 38, 3 and 11 runs respectively.

John Mooney, who struck the winning runs when Ireland beat England in that epic World Cup battle said: “It’s going to be a great occasion to play England again and it’ll be a superb boost to the team to have a capacity crowd behind us. There’s always an extra edge and a great atmosphere when Ireland play England at any sport and it brings out the best in us all. It’s extra special for me in the fact that the game is in Fingal and I’m hoping the new venue at Malahide turns into a real fortress for Irish cricket.”

Tickets for the RSA Challenge are priced at just €40 for Adults for a full day’s entertainment, with family tickets only €99 and they are on sale now.

For all Corporate Hospitality enquiries, please contact Emma in CSL Hospitality on 01.6766650 or at Emma@cslhospitality.ie

For further information and details please go to www.cslhospitality.ie