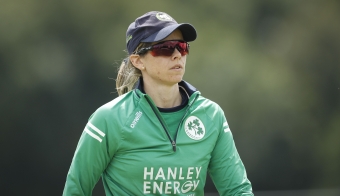 DUBLIN – Ireland all-rounder Eimear Richardson has been named world cricket’s Player of the Month for August by the International Cricket Council.

Richardson, 34, was part of the Irish squad that finished second at the ICC T20 World Cup Europe Qualifier during the month, being named Player of the Tournament. She appeared in four matches during the tournament, scoring 78 runs at an average of 38.00 (which included a 49-ball 53 in the match that ensured Ireland finished second), and claiming 7 wickets at an average of 7.28.

In 2020, Richardson was named Cricket Ireland’s International Player of the Year (Women). She has forged a professional administration and playing career with cricket in New Zealand and holds the role of Community General Manager of Northern Districts.

She was one of two Irish players shortlisted for the monthly award along with Gaby Lewis.

“It was very exciting to be nominated for the ICC Player of the Month for August and to now be voted as the winner is just so amazing and humbling.”

“It was great to contribute to overall team performances at the European Qualifiers and hopefully we have done enough to make the next stage and compete on a global level again.”

“Behind every athlete, and any achievement, is a volume of people and support, so a big thanks to my teammates, head coach Ed Joyce and wider management. Also to my workplace Northern Districts, which continues to endlessly support and enable me to play at the top level.”

“We’re delighted for Eimear – this award is great recognition for her dedication and performances for Ireland, not just over the last month, but over many years.”

“Eimear’s experience and contributions to the team both on and off the field make her a much-valued member of the squad, and it’s always encouraging to see one of our players recognised in this way.”

Richardson has appeared 94 times for Ireland since her debut in 2005.