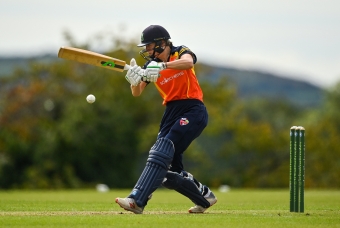 DUBLIN – After what she feels was a slightly disappointing last 12 months, Irish international Gaby Lewis believes both a change of mindset and being handed the captaincy of her Super Cricket Series team has led to her upswing in form with the bat.

Lewis, 19, debuted for Ireland at the age of 13 and has been capped 72 times for her country. A classy top-order batter and part-time spinner, she was named the Scorchers captain for the first time in the Super Series, and has been piling on the runs at club and Super 50s level at will this season. Her three innings in the Super 50s have returned 74, 40 and 95 – the latter innings being her highest List A score.

While one of the first names on the senior international team sheet these days, Lewis feels that she hasn’t been at her best – playing-wise and mentally – since Ireland’s failed World Cup Qualifier campaign in the second half of 2019.

She said of her current form:

“I haven’t really worked on anything extra this season, it’s just my mindset has changed. I was a bit down after a long year and the winter in Australia – that possibly didn’t go the way I wanted it to on the field. But Ed [Joyce] just kept saying to me to ‘stick at it, and it will come’ and to trust in the work that I was doing. Luckily I seem to have come out on the other side, and hopefully I can continue to score runs for the remainder of the season.”

While Lewis had just within the last month scored a century for YMCA at club level, she had not yet registered three-figures at List A or higher levels, and she fell agonisingly close last weekend:

“We arrived at Oak Hill and found that the pitch was a bit soft - given the day’s forecast we thought it wouldn’t get any better, and if anything it might rough up a bit. So, when we luckily won the toss, we decided to bat first.”

“Leah [Paul] and I discussed our approach with opening and thought we’d try stick out the early overs, and just see if the pitch played a little easier. As time went on I got used to the pace of the pitch – and despite losing Leah early, I dug in and figured out how to play to conditions. Mainly, it was about waiting for the ball a little longer, because the pitch was a bit sticky. The Typhoons bowled well and I found it hard to get the ball away when it was on the stumps. Luckily, though, they began to bowl enough bad balls that I was able to put away, and I started to feel more confident.”

“I started slow, but managed to pick it up at the end.”

The statistics showed that this latter self-assessment was accurate - Lewis’ first 50 runs came from 72 balls, while her last 45 runs from just 37 balls (see match centre).

And about the captaincy, how was she dealing with the extra responsibilities?

“I am really enjoying the captaincy – I don’t feel the role has brought any extra pressure. Of course, to have the experience and support of Shauna Kavanagh and Louise McCarthy on the field really helps make it a lot easier.”

“To be three wins out of four at the halfway mark, I’d definitely have taken that series scoreline if you’d offered it at the outset. The team is going well and making progress every game. We’ve fielded exceptionally well in the last couple of games, and the young bowlers have really impressed me – Kate McEvoy particularly has been brilliant, and Louise McCarthy has bowled really well, especially in the last game.”

The Super 50s competition takes a one week break, and returns to action on Sunday 6 September.

The Super Cricket Series (formerly known as the Super 3’s Series) is the peak performance pathway competition for players vying for international selection. The 2020 season has been impacted significantly by the pandemic, Cricket Ireland has condensed the competition this season to two teams playing only in the 50-over format with an eye to the now rescheduled 50-over World Cup Qualifier expected in mid-2021.

Several matches scheduled to be played at Oak Hill in Wicklow during the second half of the series have now been relocated to Dublin – the new venues are: