Ireland’s links Down Under developing the next generation of cricketers 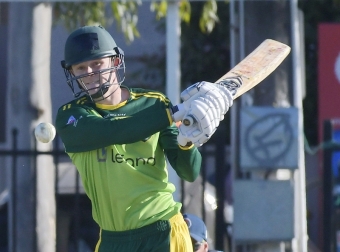 SYDNEY, Australia – 18 years ago Cricket Ireland’s Academy and Performance Manager Pete Johnston travelled out to Australia – as an aspiring cricketer at the time, he became the first of a generation of Irish players to link up with the Sydney-based Randwick Petersham Cricket Club. This year Rush’s Stephen Doheny became the latest up-and-coming Irish cricketer to turn out for “Randy Petes”.

The list of Irish cricketers to spend time with the club features some notable names, including Andy Balbirnie, Barry McCarthy and Harry Tector from the current World Cup Qualifier squad, as well as the likes of Peter Chase, Graeme McCarter, Gary Kidd and current Ireland Wolves captain Jack Tector.

Randwick Petersham is today an Official Overseas Scholarship Programme Partner of Cricket Ireland, and Stephen Doheny is the latest player to go on the scholarship programme during the northern hemisphere winter.

“Stephen [Doheny] is the latest player undertaking a scholarship with Randwick Petersham, while taking part in the International Cricket Program Sydney. He has been part of the Shapoorji Pallonji Cricket Ireland Academy for the past four years, and has progressed through the Emerging Academy into the Senior Academy. He’s represented Ireland Under-19’s, Leinster Lightning, Munster Reds and Ireland Wolves along the way.”

“It’s become a very successful partnership over the last number of years, our players have had the chance to train and play with the likes of David Warner and Usman Khawaja, and last year Harry Tector was even named in Randwick Petersham’s best XI for the season.”

Doheny has batted four times to date for Randwick Petersham, scoring 126 runs at an average of 63.00, with a highest score of 64. Speaking from the training ground at Coogee in Sydney, Doheny said:

“I have really enjoyed my time in Sydney so far. It is an amazing city with so much to offer. I am living in Randwick, which is an ideal location, as I am walking distance to Coogee Oval and with the bus stop right outside the front door I can get to wherever I need to go.”

“The weather has been fantastic so far, I have spent many hours on the beach, and it isn’t even summer yet. There are Irish people everywhere around Coogee and Bondi, so it has been easy to make myself feel at home.”

“Even though I am only here a little over five weeks I have made many memories and have plenty of highlights, most notably making my first-grade debut against Mosman in the Kingsgrove T20 competition two weeks ago. I was fortunate to play my second game this Sunday versus an all-star Manly side including players like Chris Green and Morne Morkel. The opportunity to play against these players who play all around the world was invaluable. It was a fantastic day and was made even better by getting the win.”

Doheny’s placement is much more than just playing for the club, as he explains:

“My weekdays are packed with skills and fitness training on top of the club training sessions at nearby Snape Park which is a great opportunity to train with the first-grade players. I am participating in the International Cricket Program run by Howard Grice, and I feel it has already benefitted my game. The 10-week program has given me the opportunity to surround myself with county professionals and train with highly experienced coaches and players.”

“The opportunity to train during the week on top of club training on Tuesday and Thursday afternoon is brilliant. Gricey and the other coaches have been great to me so far and have helped me highlight areas of my game that I must improve on to get to where I want to go.”

“Saturday is gameday, which brings tough competitive cricket, but I have enjoyed the busy schedule and the chance to improve my game as much as I can.”

“The club have been beyond great to me so far, all the people have been so welcoming and hospitable. There are some legends of the game at Randwick Petersham and it is great to hear all the stories of the Irish blokes that have been here before me. I am so grateful to John Stewart for putting me up, and to everyone at the club and Cricket Ireland for making this happen. I’ve had a fantastic time so far and am thoroughly looking forward to the summer and the chance to improve my game and win some silverware with the Randy Petes.”

“The Randwick Petersham and Cricket Ireland partnership is a unique partnership which sets us aside from other Premier Cricket Clubs in Sydney and Australia. Every Irish cricketer who has played and trained with the Randy Petes has fitted in superbly with our culture. They’ve certainly made their mark with their cricketing abilities. Their professionalism is unrivalled and they have certainly made many friends at the Randy Petes with their willingness to immerse themselves in the club on and off the field.”

“We always follow each player with interest after they leave us, and its always a proud moment for the Randy Petes to see our representative players doing well.”

You can follow Stephen’s stats throughout the season with Randwick Petersham here.