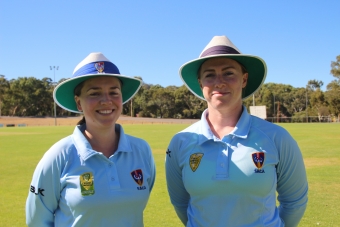 DUBLIN – Mary Waldron, Irish cricket international player and established umpire, has been appointed to the International Cricket Council’s Development Panel of Umpires. This prestigious status makes her one of only eight women around the world to be appointed.

Waldron, dual-sporting international having represented Ireland at football and cricket, sees this as a significant step in forging a career path into the Elite Panel of ICC Umpires. She is the first Irish woman to achieve this status, and is one of a number of “firsts” that she has achieved within the sport.

She is Ireland’s number one wicket-keeper since she made her debut in 2010 and has 127 international caps – captaining Ireland on 10 occasions. She is, by some margin, Ireland’s most successful female wicketkeeper with 110 dismissals to her name (the second place wicketkeeper has 25 dismissals).

“I am delighted to be appointed to the ICC Panel. To be honest, I fell into umpiring almost by accident five or so years ago when working as a Community Development Officer at Malahide Cricket Club, but have developed a love for it since. I have spent a number of Irish winters heading out to play club cricket in Australia, and in 2015 I sought out an umpire training course with Cricket Tasmania and it went from there. I can’t thank Roy Loh and Cricket Tasmania enough for the help they gave me starting out, and now SACA and Cricket Leinster for the continued support and opportunity to umpire at higher levels.”

“Since that time I have umpired a season in Tasmania, three seasons in South Australia and back here at home in Dublin I’ve stood for three seasons. I have well and truly lost track of the number of games I’ve umpired, but it is somewhere between 100 and 150 at this stage. While I have enjoyed umpiring in many grounds along the way, probably the day I umpired at Adelaide Oval would be the most memorable to date.”

Asked about her umpiring inspirations, she said:

“While [English umpire] Richard Kettleborough is possibly my favourite umpire, having the opportunity to be umpired by the likes of Claire Polosak and Sue Redfern at ICC events makes umpiring at a high level and genuine goal for me. Seeing them out there shows anything is possible.”

“And I have to mention Joy Neville – she may be a referee in a different sport but I cannot praise her highly enough she just takes everything in her stride. She shows that at the end of the day we are just doing a job and it doesn’t matter our gender - and she’s Irish!”

Asked if she had any goals or aspirations for her umpiring, she said:

“I don’t have a ‘bucket list’ as such, but I went to the World T20 finals in Eden Gardens, Kolkata in 2016. Obviously I’d like to play in a World Cup final there, but the atmosphere was electric and I did think at the time I’d like to umpire there one day. Oh, and a umpiring in a Test match - though again I’d rather play in one first!” • Mary started playing football (soccer) at 11 years of age. She was selected for - and went on to captain - the national Under- U16s, U18s & 19s team, and has two senior national women’s caps playing against the Faroe Islands and Switzerland.
• Mary began umpiring in 2015 and has progressed her umpiring career in parallel to her playing career since this time. She has annually trained in Australia during the Irish off-season.
• In 2018, Mary was appointed to the First-class Panel of Umpires in Ireland
• In 2018, Mary became the first woman to umpire a Men’s List A match in Ireland last summer (List A is a technical term, but it’s one down from full international) - Ireland Wolves v Bangladesh A
• In 2019, Mary was one of the two umpires who became the first woman umpire pairing to umpire a Men’s First Grade Premier Cricket match in Australia.
• In 2019, Mary was selected to stand in the Final of the Under-18s National Championship in Australia. She stood in the tournament last year for the first time, but to be handed the duties for the final was a recognition of her progress.