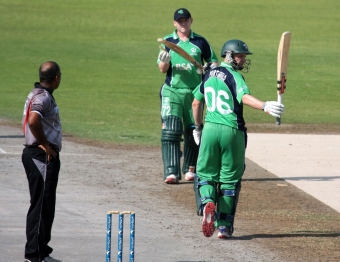 The skipper led from the front in Sharjah © INPHO/Barry Chambers

Following two wins against the United Arab Emirates in the World Cricket League in Sharjah, Ireland are in pole position to claim a spot in the 2015 ICC World Cup in Australia and New Zealand.

The top two finishers in the League avoid playing in a 10-team World Cup Qualifying tournament due to be played in 2014. The top two teams in that Qualifier also go to the World Cup in 2015.

Ireland are on 17 points after 10 matches with four left to play - two against Netherlands in July and two against Scotland in September. Win two out of those four and Ireland are guaranteed qualification. Win just one, and things get more complicated.

Should Scotland and Afghanistan win all their remaining matches they can join Ireland on 19 points, while Netherlands can get to 22 points if they win their remaining six games, 20 if they lose once to Ireland. If teams are tied on the same points, the ranking will be decided by net run-rate. As it stands, Ireland have a far superior net run-rate to Scotland and Afghanistan, but lose three games badly and that could all change.

Look at it another way, though, and, as long as Ireland beat the Netherlands once, all the boys in green need is for two of those three teams to lose one of their remaining matches and Ireland are home free. Beat Scotland just once, and all it takes for Ireland to book their plane tickets is one loss from Afghanistan.

These are permutations that the players, no doubt, know all about but they want to qualify the easy way, at the top of the table. “We will be looking to win all four of our remaining matches, that goes without saying,” asserts captain William Porterfield.

“We don’t want to get into ifs and buts; best thing is if we take matters into our own hands and win our matches against Netherlands in July and go from there.” he added.

Things will become a lot clearer once the Netherlands play Namibia in their two round five matches in April. If the Netherlands lose those, the gap that Ireland have opened up at the top of the table could seem impassable.

* denotes remaining matches that will be live streamed at www.icc-cricket.com
** Dates and venues of these fixtures will be announced in due course