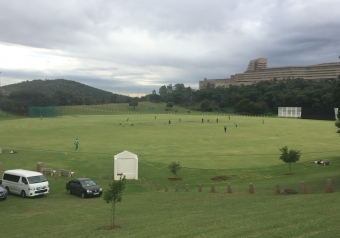 After losing the toss and being sent in to bat, Ireland lost Captain William Porterfield early for 15 before fellow opener Paul Stirling took to the bowling with aplomb. Stirling smashed 156 runs from 103 balls (including 4 x sixes, 21 x fours). The Middlesex batsman’s innings lasted 103 entertaining minutes, and was ably supported by Ed Joyce (49) and Kevin O’Brien (60*).

Frequent showers interrupted play reducing the innings to just 44 overs, however the batting side scored at a dominant clip of 7.5 runs per over and ended on 332-8.

The Ireland squad plays three more warm-up 50-over matches in South Africa, then moves to Zimbabwe for two further warm-up matches, with the qualifier tournament proper starting with a match against The Netherlands on 4 March.

In related news today, the United Arab Emirates edged our Nepal in the Final of the ICC World Cricket League Division Two, meaning that the UAE becomes the fourth side Ireland will face in the Qualifiers Group Stage.