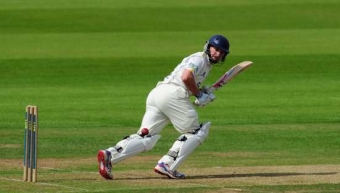 William Porterfield predicts that he and Boyd Rankin will not be the last Irishmen to win English cricket’s county championship.

On Thursday Porterfield and Rankin became the first Irishmen to win championship winners’ medals, as part of the Warwickshire side that secured the 2012 title.

Legendary Irish off-spinner Dermott Monteith was part of the great Middlesex side of the 1980s, but played only one game in the 1982 title-winning season.

Warwickshire beat Worcestershire by an innings and 202 runs on the third afternoon of the four-day game at New Road to confirm their first title since 2004, with Rankin taking 2-19 in eight second innings overs.

“It is great, but the way Irish cricket has progressed in the last few years, it would not surprise me if there were not quite a few more in the future,” Porterfield told Setanta Sports immediately after the game at Worcester.

“What we have done with Ireland in the last few years at World Cups has been pretty special, but in domestic cricket terms this is my best moment. The county championship is the Holy Grail, and to win it is a pretty special feeling.

“We have won games that we have dominated and won games that we were behind on first innings. We have great character in this side, and we have to keep this going for next year. But now we will savour the moment.”

The pair were part of the Warwickshire side that missed out on the title on the final day of last season.

Needing to bowl out Hampshire on the fourth day at Southampton, Mike Carberry and Neil McKenzie both hit centuries to earn the home side a draw, and in the process hand the title to Lancashire.

Porterfield says that the memory of that long day in the field on 15 September last year helped give them the focus that brought title success in 2012.

“When we came off the field last year, there was a strange atmosphere,” he said.

“We had lost and were obviously disappointed, but we were walking off and already looking forward to the next year. We could not wait all winter for the season to start.”

Porterfield and Rankin will travel to Colombo on Friday morning to meet up with the rest of the Ireland team, already in the Sri Lankan capital preparing for the ICC World Twenty20, which starts on 18 September.

Ireland play Australia on 19 September and the West Indies on 24 September, with both games taking place at the Premadasa Stadium in Colombo.

“It is a short, sharp tournament, with two games in five days, so we need to hit the ground running,” he said.

“Hopefully in the next 12 days before the tournament we can brush up on things as a squad. There is no reason why we cannot get out of the group and progress to the Super Eights, and even further.”

Porterfield says that he will bringing his opening partner Paul Stirling a present, after the Middlesex star complained on Twitter that the team hotel served chicken curry for breakfast.

“It is different touring the sub-continent and a great place to play cricket, but I may have to bring a few rashers with me,” he said.