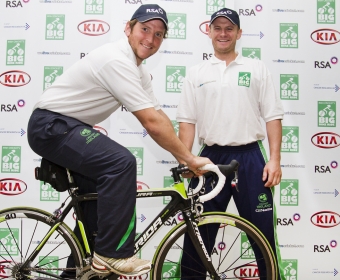 The Pepsi ICC Development Awards European winners have been announced by ICC Europe for 2012 with winners coming from six different European nations - Cricket Ireland won one award thanks to Gary Wilson & William Porterfield’s Big Bike Ride which won the Spirit of Cricket award.

Cricket Scotland took the award for ‘Best Overall Development’ after having an extremely strong year and incorporating a number of different activities.

These included the Summer Squad, where a team of coaches delivered community and curriculum based sessions ,cricket corporate evenings, the growth of national junior cups and the Asda ‘volunteer of the month’ prize initiative. The fantastic promotional event hosted in Edinburgh ‘Olympic Live site- Festival Square takeover’, in partnership with Cricket Factory, involved 450 participants during the day and helped to raise the profile of cricket in Scotland.

KNCB have received two awards this year in the ‘Best Junior Participation Initiative’ and ‘Best Women’s Cricket Initiative’. The junior accolade was awarded for the cricket challenge- The European Platform for Bilingual schools cricket curriculum and tournament. This involved 34 schools in the cricket programme, introducing more than 65 teachers and over a 1,000 young participants, aged 14-15 years, to the game. The European Women’s Cricket week in conjunction with Kampong CC was highlighted for the ‘Best Women’s Cricket Initiative’.

The ‘Photo of the year’ award goes to Israel’s David Harris and Charlton Book’s iconic image of fire burning in the bush in the backdrop of a T20 match in searing 40c heat. The ‘Best Cricket Promotional and Marketing programme’ goes to France Cricket for the promotion of the MCC v France Olympic re-match which produced great coverage in ICC Cricket360 and has resulted in three new major projects including a brand new university cricket programme in France.

The ‘Volunteer of the Year’ has been awarded to Mike Kwan from the Deutscher Cricket Bund. He has worked tirelessly building up cricket in Munich for the past eight years. David Rhodes of France Cricket has been awarded the ‘Lifetime Service’ award in recognition of his commitment to French cricket.

The ‘Best Spirit of cricket’ initiative was won by Cricket Ireland for Irish Cricket’s big bike ride led by Gary Wilson and William Porterfield, which raised over £30,000 for cancer research.

Gary Wilson said upon hearing of the award, ‘We’re delighted to have won the ‘Best Spirit of Cricket Initiative’ in the Pepsi ICC Development Awards for Europe. We did the Big Bike Ride for a worthy cause, a cause that is very close to my heart and many thanks to the ICC for the further acknowledgement. I have to pay a special thanks to welivecricket.com and all of the support team we had: Brendan Connor, Tim Smalley, Roy Torrens and Robin Walsh, without them none of it would have been possible at all.’

The winners are as follows: