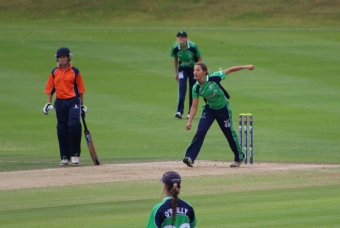 DUBLIN – Former international cricketer and current international hockey player Elena Tice will feature as part of the commentary team during the women’s Super Series decider at Malahide on Sunday.

Tice has subsequently gone on to be a World Cup Silver Medal winner with the Irish Women’s hockey team, although she actively follows the progress of her former international cricket teammates:

“I loved my time as a cricketer and all that I was fortunate enough to experience with the Irish team. Without doubt, my best memories would have to be at the T20 World Cup in Bangladesh in 2014 where we played at the Sylhet Stadium in front of big crowds.”

“I have followed the girls closely throughout the years since leaving cricket - it’s been awesome to watch and support them in all they have done. To be asked to commentate on this year’s Super Series decider is great - I can’t wait, it should be a great fixture.”

Part of the commentary and promotion of the game will be around the 20x20 campaign, and Tice sees that push as important for women’s sport:

“The 20x20 campaign has been a huge thing for women in sport in Ireland. You see the campaign everywhere now, and more importantly you see an increasing number of girls and women playing, watching and supporting Women’s sport.”


With regards to her other passion, hockey, Tice is back in training with the international squad as they prepare for the rescheduled Tokyo Olympics now set for 2021:

“It was a really tough adjustment with the delay of the Olympics, but we are focused on 2021. It’s brilliant to be back on contracts and back training together. We are excited for the year ahead.” THE MATCH AND LIVESTREAM

The women’s Super 50 Series concludes on Sunday, with the winner of the eighth match of the Series between the Scorchers and Typhoons to be crowned champions for 2020. While crowds are not permitted, Cricket Ireland will livestream the match via its Youtube channel with commentary and multi-camera production.

Featuring as part of the livestream broadcast will be 20x20 campaign elements, including guest commentators, and players will play in the iconic campaign face paint stripes.

The journey of women’s sport in Ireland.