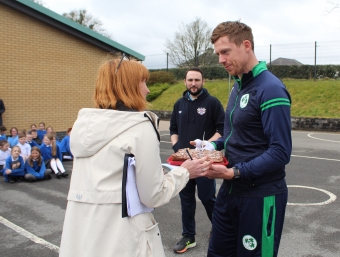 Craig Young receiving a birthday cake on his arrival

The NWCU is delighted to confirm that Enniskillen CC will compete in this year’s League 4 cup competitions with a view to joining the Union in a full capacity ahead of the 2023 season.

A lot of hard work on the part of people like father and son duo Kenny and Stephen Maxwell, ably assisted by NW Development Officer Brian Allen has seen the Fermanagh club make giant strides to the point where they are now ready to get going again after an almost 30-year absence.

And earlier this week, Brian accompanied Irish International Craig Young up to Enniskillen where they saw first hand the promotional work that Kenny is currently doing in the local schools. They were also there to see skipper Stephen Maxwell presented with the club’s coloured kit for the start of their new campaign by sponsor’s ‘Pat’s Bar’.

Incidentally, just to add a little spice to Enniskillen CC’s new beginning, the League 4 cup draw has paired them away to neighbouring North Fermanagh II’s, a game that the captain says they’re really relishing:

“There is massive excitement at the club both about getting back to playing competitive cricket and obviously the draw itself.

“We’ve come a long way since those initial conversations three years ago and it was very surreal when we pulled on our new kit for the launch this week.

“I’m extremely proud to captain the side and we’ve worked very hard throughout the winter to get ready for this. We’re a multi-cultural and diverse club and we’re just looking forward to getting out there and playing cricket.

“We played quite a few friendlies last year but we showed our inexperience and were a bit naïve at times in games. I feel we’ve really bonded as a team in the close season and we’re looking forward to this season and getting ready to compete across all formats in 2023.” Chairman David Cadden echoed those sentiments and praised the Maxwell boys for their part in making things happen:

“There was pretty much just the three of us at the start and both Kenny and Stephen worked hard on securing facilities and taking care of much of the admin we needed to get up and running.

“We now have a player pool of around 25 and a superb committee and we’re looking forward to the cup competitions and a programme of friendlies this summer.

“I would also like to mention our vice-chairman, Mick Lodge, who worked hard to sort out our new coloured kit and to our sponsors, Pat’s Bar. We are also grateful to Radiant Dentistry and Chaska from the town for their valuable assistance.

“We’re really hopeful of securing a league place next year and maintaining a long and enjoyable place in the NW cricket ranks as we continue to grow a strong presence for the sport in Fermanagh.” Reflecting on their launch this week, Kenny Maxwell said it was “an honour and a privilege to have Craig Young and Brian Allen up with us to celebrate this new start:

“Brian has been a wonderful source of help and encouragement to us and his efforts played a big part in this progressing so quickly.

“Craig is obviously a highly regarded International cricketer and there was a lot of excitement among our school groups to have them there.

“An eagle-eyed member of staff at Maguiresbridge PS noticed that it was Craig’s birthday on Monday and he was presented with a card and a cake on the day.

“Schools are obviously a huge part of our club’s future and my role is designed to ensure that we continue to develop our youth. We hope to get involved in the North West ‘Smash It’ programme soon as well.

“The children had a really enjoyable day- as we all did- but it was fantastic to be able to give them a flavour of chatting to someone who had started to play cricket in school and who had gone on to become an International.”

Our best wishes to all at Enniskillen CC and we hope it won’t be long until the club is making its own headlines around the North West.