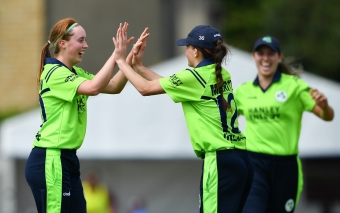 DUNDEE, Scotland – Irish international Sophie MacMahon has enjoyed her introduction to international cricket tournament life and believes that two years on from her international debut she has confidence and knowledge of her game.

MacMahon made her first international appearance in a 50-over match in April 2017 against England Women, in which she claimed England wicketkeeper-batter Amy Jones as her first wicket. In and out of the squad over the following 18 months, her latest return to the international squad was her T20 International debut in May 2019 against West Indies during which she took a wicket in each of the three matches of the series in some eye-catching performances with the ball.

Speaking ahead of the semi-final, MacMahon said:

“I’m really enjoying the Qualifier tournament so far, I’ve never played in a tournament like this before. It was pretty nerve-wracking at the start, but it was great to get off the mark with a couple of wins.”

“In 2017 I was not as mature a cricketer and didn’t know my game as well as I do now. Especially my bowling, I used to just bowl the ball without thinking too much about what I was trying to do, but I certainly have a clearer idea of my game plan these days. So now it’s just about believing in myself and being confident.”

“I’ve really enjoyed working with Ed [Joyce], he brings a nice relaxed atmosphere and the confidence he has in the players helps us go out there and play with freedom. Before I left Dublin I had a session with Rob Cassell [national bowling lead coach] which was great – I came to learn that it’s all about knowing what your bowling plan is and focussing on executing that.”

MacMahon also believes that the Toyota Super 3s series has been beneficial for her development:

“The Toyota Super 3s has been really helpful in my progress - it’s a good way to work on what you’ve been practising in training, and being able to bowl at high quality players really helps for when you step up to international level.”

Ireland Women face Bangladesh in a do-or-die semi-final this morning at 10am (Irish time) – the winner of which heads to the Women’s T20 World Cup in Australia in February.