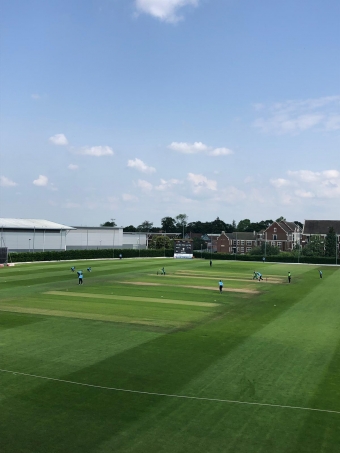 LOUGHBOROUGH - The Irish Men’s Academy fell to a five wicket defeat to the English u19 side yesterday in Loughborough. However, there were some good individual performances throughout the side and a lot to learn from going into their second fifty over clash with the same side tomorrow.

Pete Johnston, the Shapoorji Pallonji Cricket Ireland Academy Manager, feels these sorts of trips are fantastic to come and experience both the standard and the facilities available to them. He said: “We have the best facilities in the world at our disposal here this week and we are very grateful that England have invited us over, following on from our game against them during pre-season. We are getting the best playing conditions, quality opposition, best nets and the best nutrition and recovery services around.”

“This is a huge experience for our u19 cricketers, with eight playing on this squad. If they do make it to a World Cup, they will have got vital experience of playing against full members, which we hopefully can do more of in the future.”

Having elected to bat first in the game, the Irish Academy had two quick set backs but recently capped Irish International, Gareth Delany and Stephen Doheny rebuilt in the early section of the game. They had brought the side from 15-2 to 71-2 when Delany departed for 30. Another quick breakthrough brought captain, Neil Rock in to join his Rush teammate, Doheny. These two batted with great application during the middle period, both pushing hard for runs when they could. This included seeing Doheny through to his half-century, which was very well compiled.

Unfortunately, after a stand of 58 between the two, Rock was caught for 26. Yet, this brought Rory Anders to the crease, the new YMCA recruit this season batted with brilliant intent, clearing the ropes twice in his run a ball 33. He too managed to bring up a fifty partnership with Doheny, but it was Anders’ dismissal that started a mini collapse for Ireland. They fell from 183-5 to 210 all out and most importantly, didn’t bat six of their overs. Doheny top scored with a fine 76, he looked composed and in control throughout his knock.

Pete Johnston added: “At 183-5 with more than ten overs to go, I thought we were in a good position to get 280. With a side that can bat as deep as ours, it was disappointing to leave six overs out there. Credit to England, their fielding was outstanding and the bowling of Jack Morley and Kasey Aldridge was also very good.”

The Irish Academy were able to strike with two quick wickets in the run chase with Northern Knights bowler, Matthew Foster striking twice. He bowled well in tandem with Fionn Hand at the top of the innings. However, it was the third wicket partnership which would break the back of the majority of the run chase. England u19 captain, George Balderson and Jack Haynes came together and put on 113 for the third wicket, made in good time too as they went to press down their authority on the game.

Fionn Hand returned into the attack to remove Haynes for 54, but it was Balderson’s 90 that got the English u19 side within touching distance of victory. He did fall ten runs short of his century when being bowled by Nathan McGuire and Gareth Delany also picked up a wicket late in the piece, as the English u19 side got to their total with five wickets in hand and nine overs to go.

Johnston said: “With the ball I thought Fionn and Matthew Foster showed some good skills and discipline and got some reward which was encouraging. The lads will get together tomorrow and discuss the performance, I’m confident that we can action plans to bounce back strong in the final game on Thursday.”

The two sides play against each other in the second fifty over game in Loughborough tomorrow. Play starting at 11 am.