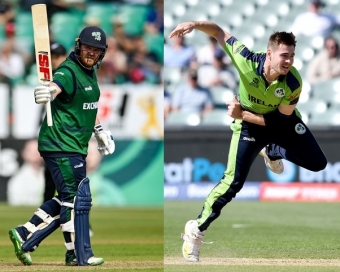 DUBLIN – Irish internationals Paul Stirling and Josh Little have been offered deals in the Abu Dhabi T10 League, with Cricket Ireland agreeing to No Objection Certificates (NOC) allowing the players to take up the opportunities.

Stirling, Ireland’s most experienced current player, has played in T20 franchises in Bangladesh, Afghanistan, Sri Lanka, Pakistan, West Indies and England. He has signed up with New York Strikers in Abu Dhabi. His first game is 23 November 2022, with the tournament set to finish on 4 December 2022. Follow the scores here.

After a very successful ICC T20 World Cup campaign Little, 22, has signed for last year’s winners Deccan Gladiators. He has previously played with Dambulla Giants of the Lanka Premier League, and Manchester Originals in The Hundred, where they finished runners-up this summer. Little heads to the tournament after taking 11 wickets in Australia, including a brilliant hat-trick against New Zealand. His first game is 23 November 2022, with the tournament set to finish on 4 December 2022.  Follow the scores here

The full Deccan Gladiators squad is: