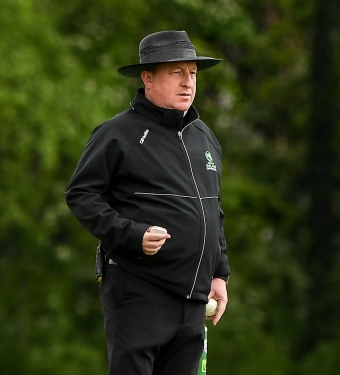 DUBLIN – The Irish Association of Cricket Umpires and Scorers (IACUS) and Cricket Ireland have confirmed the list of representative umpire appointments for 2022 – which includes Downpatrick’s Jareth McCready as the newest member of the Cricket Ireland International Umpire Panel.

McCready, 50, played for Downpatrick Cricket Club from Under-11s through to First team, before work took him away from his home town, after which he played for Instonians and Armagh. After an ACL injury sustained during pre-season training with Armagh in 2003, he turned to umpiring to stay connected to the game, and has now umpired for 17 years.

“I’m delighted with the nomination to the international panel – and honoured to follow in the footsteps of Alan Neill.

“I’ve umpired for over 17 years now and have been privileged to stand in some important matches – including an Ireland Women v New Zealand match in 2018, several Ireland Women fixtures in 2021, a National Cup final, an Ireland Wolves v Bangladesh A match in 2019 – as well as two NCU Cup finals. I was also fortunate to call play in the first first-class domestic game in Ireland!”

Crediting several key people with his switch to umpiring and development, he said:

“It was Jonathan Briggs who first suggested I try umpiring, and I have never looked back. Trevor Henry (who I stood within my first game at Lurgan Park) was excellent support, while Paddy O’Hara was definitely a role model – in fact, most of my technique is based on Paddy’s approach.”

Having won the Irish Senior Cup in 1991 with Downpatrick as a player, as well as playing in Ulster and Irish schools in 1990 - winning a schools cup with RBAI in 1990, McCready is dedicated to umpiring in the way he once was to his playing:

“My goal is just to keep advancing and learning. To make a good umpire you need to be prepared before each match – not just in the knowledge of laws and regulations, but in terms of player management. Preparation gives you a good basis for decision-making within the game.

“Umpiring really is the best seat in the house. I’ve seen a lot of top quality cricketers take up umpiring after they finish playing, and I’d encourage that - to take it up sooner rather than later. There are fantastic opportunities nowadays for umpires.”

And does he have a dream match that he would love to umpire one day?

“It would be Boxing Day at the MCG, definitely. Plus, I would love to umpire an Irish Senior Cup final – it would possibly mean that I would be the first person to have a winner’s medal as a player and an Umpire’s Medal!”

“The standard of umpiring is very good in Ireland at the moment. The Cricket Ireland Panel is looking as strong as it ever has in 2022, and that’s a credit to the local associations for all the hard work they put in. The game at representative level has grown massively since Ireland became a Full Member, for instance, in 2018 we made 324 appointments, and in 2021 we had a record year, where we made 1,424 appointments.

“For those interested in learning more about umpiring, there are clear pathways in place from the day you start umpiring, all the way through to when you get appointed to the Cricket Ireland Panel. Jareth’s appointment to the International Panel shows that the process works - and if you are dedicated and hungry to reach the top, then you just have to look at Roly Black, who is just back from umpiring the Under-19s World Cup Final.

“We run training courses every year, and in the last couple of years, we have been pleased to see record numbers attending across Ireland. But that doesn’t mean we aren’t looking for more people to get involved, there’s always opportunity for new umpires to start out. Last year we established a standalone education set-up, which is led by our training officer Alan Neill.

“One area we are always keen to grow is our female umpires – and while the interest is there, we are yet to see substantive numbers coming through the system. Mary Waldron is obviously becoming a real role model to many, and achieving great things with her umpiring, but to be honest, we haven’t found the answer yet to growing female umpiring numbers. One thing is clear though, there is a fantastic opportunity for female umpires from grassroots to international cricket at the moment, and we hope to develop some more ‘Mary Waldron’s’ very soon.”

And what makes a good umpire?

“To make a good umpire you need to be very dedicated to the process, it can be a decent time requirement and is challenging for some. But what amazing opportunities there are now for umpires – Jareth, Mary and Roly show what can be achieved. To get the opportunity to travel worldwide to umpire is an incredible experience, and one thing that all our team say when umpiring is: we have the best seat in the house.

“Umpiring is also a fantastic way for ex-players to stay in the game - and their experience can be a big plus, as they have a good understanding of what they expected of umpires when they played. Most of our umpires come from local clubs, and we’re hoping that some internationals may consider it when they finish their playing careers.

“If you are interested in becoming an umpire, then just contact your local association directly or through their website. I can assure everyone of a warm welcome, and there will be no shortage of help available to you.”

The full Cricket Ireland / IACUS Umpiring Panel for 2022 is drawn from: