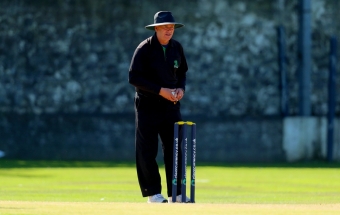 Mark Hawthorne officiating at the National Cup Final in 2018

DUBLIN – Irish cricket umpire Mark Hawthorne has departed Ireland today for a temporary move to the Caribbean as part of an Umpire Exchange Programme agreement between Cricket Ireland and Cricket West Indies.

The exchange programme is designed to allow umpires from Full Member countries the opportunity to stand in first-class and top-level tournaments away from home. The programme provides the opportunity for selected umpires to experience working with different players, grounds, playing regulations and climates – which not only provides personal development, but supports those umpires when called up to officiate at various tournaments around the world. As part of the agreement, Cricket West Indies will be sending an umpire to Ireland to stand in a number of Inter-Provincial matches this season.

Belfast-born Mark is one of four Irish umpires on the International Panel of ICC Umpires, along with Alan Neill, Paul Reynolds and Roland Black.

Just before departing for the Caribbean today, he said:

“The exchange came about due to contacts between Cricket Ireland and Cricket West Indies. Both Boards are keen to assist the development of officials and they see exchanges as essential to the effective development of versatile umpires who can operate comfortably in varying conditions.”

“As part of the opportunity I will be umpiring two four-day First-class matches. The first match is in St Vincent and then I travel to Antigua for the second match.”

“I will also have the opportunity to meet Peter Nero who is a former international umpire and is now an umpire coach in the West Indies. I will be interested to hear his thoughts on developing strategies to improve umpire development as this will be important as the game continues to develop in Ireland.”

Mark, who has been umpiring regularly for 24 years, actually stood in his first international match in 2002:

“I remember well my first international match, it was Netherlands v Italy. The match lasted 100 overs and when it came to the final ball any one of three results was possible. Some of the lessons I learned that day have stayed with me ever since - it was a difficult match to umpire with a few contentious issues, but I enjoyed the challenge.”

“One of my most memorable matches was at Malahide when 10,000 people turned up on a sunny September day to watch an Ireland v England ODI. The atmosphere was fantastic and it was great to see Ireland host such a special occasion. I was also the TV umpire for Ireland’s first Test match - a memorable moment in the history of Irish cricket and I was delighted to be involved.” Mark’s experience has taught him a number of important lessons, and he was keen to give advice to those starting out in umpiring:

“From my earliest days of umpiring I have met many good colleagues, and without their advice and encouragement I wouldn’t have made much progress. Umpires are good people who care about the game of cricket and who like to do their best. We are not robots and we do make mistakes, but recovering from setbacks is all part of the challenge.”

“For those starting out, there is a very collegiate approach - new umpires will be appointed to matches with experienced colleagues. But whether you are umpiring at Malahide, Melbourne or Mumbai it is true that as an umpire you get the best view of the match. My advice would be to give it a go and remember to enjoy it.”

“Everyone gets into umpiring in different ways. I played cricket at 3rd and 4th XI for Cliftonville and was encouraged to attend the umpire training course as our club hadn’t provided any umpires for a few years. Paddy O’Hara - an Irish International umpire - was always very encouraging and I soon realised how much I enjoyed umpiring. I enjoy cricket and I like meeting cricket people. Umpiring has given me the opportunity to meet many cricketing people and it has also enabled me to be involved at a much higher level than was possible for me as a player.”

“Cricket West Indies is delighted to be entering this relationship. For us, this is a continuation of the Umpire Exchange Programme, which has seen us send various umpires to both England and Bangladesh in the past. This is a project that we feel will be beneficial to all parties involved. We look forward to our umpires sharing cultural experiences with those of Cricket Ireland. The guys are looking forward to welcoming Mark.”