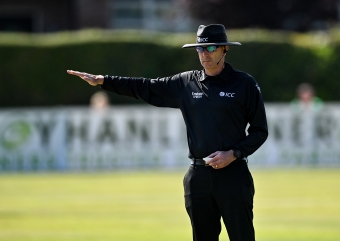 ANTIGUA – Irish elite umpire Roland Black has been confirmed as one of the two on-field umpires at the ICC Men’s Under-19s World Cup Final on Saturday.

Black, who has been umpiring since 2006, is one of four members of Cricket Ireland’s International Umpires Panel, as well as part of the Irish first-class umpire panel. He stood as an umpire at the ICC T20 World Cup Qualifier in 2019 and at the ICC Men’s Under-19s World Cup in South Africa in 2020.

The final will see India Under-19s take on England Under-19s in the highly-anticipated finale to the tournament.

Ireland Under-19s finished a highly-creditable 10th place in the World Cup rankings, and automatically qualifying for the next edition in 2024.

The match official appointments for the match will be:

The match will be shown on Sky Sports Cricket in Ireland / UK, starting at 1pm (GMT).

Livescoring will be available via the ICC Match Centre here.

The tournament fixtures and results to date can be found here.

Before heading to the tournament back at the end of December, Black spoke to us from his home:

“I am really looking forward to the opportunity – being able to focus on my umpiring for a sustained period allows me the chance to work on improving and fine-tuning my game. I’ll admit, not waking up to dark cold January mornings will also be a bonus!”

“I have never been to this part of the world before, so I’m looking forward to the opportunity of umpiring across the four host countries. I really enjoy visiting new grounds for the first time and I had a good long chat the other day with [English umpire] Ian Gould, to try and tap into his knowledge of umpiring in the Caribbean during his career. I was keen to get an idea of how the pitches will play, what to expect with the weather and the logistics and challenges of traveling between the different countries.”

“I officiated at the last Under-19s World Cup in South Africa at the start of 2020, so I will look to build on those experiences. An Under-19s World Cup is an opportunity for future stars to show what they can do, and in South Africa I made a note of five players across the tournament who really impressed me. It has been interesting to watch their progress from a distance as these names appear in T20 domestic competitions or gain selection to their full international teams.”

“To umpire at an event like this allows me the chance to work with officials from across the world. Any small tips I pick up that I believe will be of benefit, I will bring back and share with my umpiring colleagues in Ireland.”