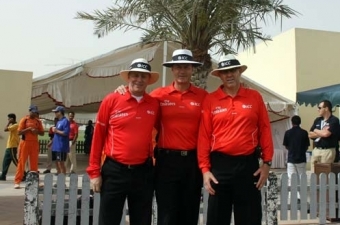 Three Irish umpires have been appointed to the ICC Associate & Affiliate Panel of International Umpires for 2016, giving them the opportunity to umpire in ICC events both regionally and globally.

Alan Neill, Roland Black and Mark Hawthorne all made it onto the panel, which has increased in size this year to reflect the increased amount of cricket they are likely to be covering over the course of 2016.

Hawthorne, already a member of the panel from 2015 is joined by Black and Neill, something Peter Thew, Chairman of the Irish Association of Cricket Umpires and Scorers is very happy about.

“IACUS is delighted with the news of Alan Neill and Roly Black’s elevation to the ICC Associates & Affiliates Umpires Panel where they join existing panel member Mark Hawthorne.

“This is justifiable reward for the hard work that each of them has put in over the past years.  In addition, this represents a serious boost for Irish cricket umpires.  Younger umpires who are joining the ranks of local associations across Ireland can now see a pathway to the top following these three standard bearers.”

Hawthorne has stood in many Internationals involving Ireland as well as other countries, while Black and Neill have been involved in International cricket through the ICC Europe Panel in recent years.  with Black acting as third umpire when Ireland took on Scotland in three T20 International matches in 2015 and Neill standing at the World Cricket League Division 6.  All three have been regular umpires in the Hanley Energy Inter-Provincial Series in recent years.

Neill, who stood at the World Cricket League Division 6 last year, has been working towards this appointment and could not be happier with the news.

“I am delighted to be recognised by CI as being of the required standard, and with suitable experience to represent them in global tournaments and International matches both worldwide and at home.

“It was always a goal of mine to achieve this status and I am looking forward to the challenges that lie ahead. I hope to continue to learn and share these experiences with my colleagues.”

Black, a native of Bready in the North West stood as third umpire in the T20 International series between Ireland and Scotland at his home ground last year, he too is pleased with the appointment.

“It is an honour to have been appointed to the ICC Associate & Affiliate Panel.  I fully committed to Umpiring in 2009 after a long playing career and I will continue to work hard and look forward to the new opportunities ahead.

“I hope to pass on the knowledge and experience I will gain to officials in both the North West and across Ireland. I would fully recommend Officiating to any player coming to the end of their career as a good way of staying involved in the game and giving something back to the sport.”

“Congratulations to Mark, Alan and Roly on joining the ICC’s new Associate and Affiliate Umpires’ Panel for 2016.  Not only is this deserved recognition for the hard work all three have put into their officiating, but also it serves as an indicator of what can be achieved by any Irish umpire who has aspirations to officiate at the very top levels of the game.

“There will hopefully be more opportunities for all our officials to develop further once the Inter-Provincial Championship achieves First-Class status, as highlighted in the CI Strategy, and the real possibility of Test Cricket in the future.  Well done to all three.”