“It registered 5.2 on the Richter scale!” - Tyrone Kane talks about his scholarship in Perth 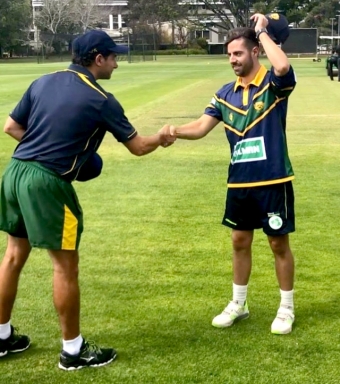 Tyrone Kane receives his UCC cap from Will Stibbs

It’s been a big year for Tyrone Kane. In May 2018 he was one of eleven men that stepped out at Malahide to play in Ireland’s inaugural men’s Test match, then in September he was named one of the inaugural Ed Joyce Scholarship recipients. The latter of these leads him to where he is now - playing club cricket in Perth, Western Australia. We recently spoke to Tyrone about his time in Australia so far.

“I’m currently well into a 10-week overseas programme in Perth thanks to the Ed Joyce scholarship fund. I’m playing for the University of Western Australia, better known as UWA, which is quite fitting as Ed himself played here back in the 2001-02 season. I would’ve been seven years old at the time, so just missed him!”

“After arriving in October I made my first grade debut straight away, which was a huge honour. To don the mighty UCC [University Cricket Club] baggy blue straight off the bat was great. I started well in my first game picking up two-fer but have since been struggling with a couple of injury issues and have since played as a bat in second grade. I’ve only batted twice in matches since I’ve been out here which is tough but a good experience and definitely makes you appreciate any time you spend in the middle.”

Tyrone is not only enjoying the cricket, but also playing and training with some notable cricketers:

“The club captain Will Bosisto is a former Australian Under-19s captain and fully contracted Western Australian player/Perth Scorchers cricketer (who recently hit 167* in the Sheffield Shield against Queensland). We actually crossed paths before during the Under-19s World Cup in 2012 where we took on each other in Townsville. We had a laugh about that as there was a coupe of choice words that day out if I recall correctly.”

“Alongside Will, we’ve David Moody who is a dangerously quick fast bowler also contracted to Western Australia and the Hobart Hurricanes respectively.”

“Will Jacks is also at UWA as the overseas player. He’s a member of the Surrey team who recently won the English County Championship. Not a bad start for his first season as he said himself. He recently scored 205 in a demolition of Claremont in 1st Grade. He’s a former England Under-19s international and trains alongside myself and the other two Irish boys with Stewart Walters mid week.”

“Our bowling coach at the club is former Australian Test cricketer Terry Alderman. I’ve been working closely with him on my return from injury. Without doubt his knowledge is helping progress my game.” “The club program in UWA is run by Will Stibbs, alongside Wayne Pearson - a fellow Irish man and good friend of Kyle McCallan, so he tells me. They do a terrific job and have created a tremendous environment through out the club.”

So what does a typical week look like for Tyrone?

“Typically I have two or three 1-on-1 sessions with Stewart Walters alongside group training on a Wednesday night with WA academy and club training on Tuesday and Thursday nights. In amongst that we have specific gym and running programs to undergo, and then at the weekend we play for our respective club sides. A busy program but one which is extremely beneficial.”

And how is life outside the cricket?

“One thing that I didn’t think I would experience out here was an earthquake! Yet, recently around 5am I was awoken to my bed/apartment block swaying from side to side. An experience that’s for sure. It registered 5.2 on the Richter scale!”

“Other then that I have without doubt been enjoying my time here. This is my first time in Perth so I’ve been taking in as much as it has to offer. Beautiful beaches and a quite trendy city. Like Harry in Sydney I’ve grown quite fond of the Ocean Beach Hotel, known as the OBH, at Cottesloe Beach.”

“Over the last little while the alarm has also been set the last couple of days for 5am to get up and watch Laura and the team compete at the World T20 in the West Indies. Although results didn’t go their way the whole management and squad should be so proud of their efforts. It was fantastic to watch them live on Fox Sports and they are unbelievable ambassadors for cricket in Ireland. Hopefully they can go onwards and upwards from this tournament.” Image: Cottesloe Beach in Perth…nice end to a day!