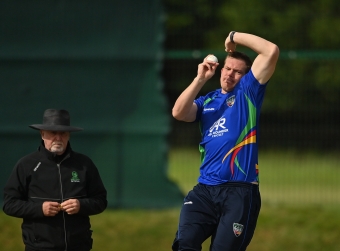 Hume bowling at North Down

North West Warriors all-rounder Graham Hume admitted the call from the selectors caught him by surprise, but he is determined to take his opportunity during the Ireland Wolves’ month-long tour of Bangladesh starting tomorrow.

The tour is scheduled from 17 February to 19 March 2021, and will see the Wolves play a multi-format eight-match series against Bangladesh A.

Hume was born in South Africa where he played first-class cricket for Gauteng. A left-handed batsman and right-arm medium pacer, he was part of South Africa’s squad for the Under-19 World Cup in New Zealand in 2010 and he was his team’s leading wicket-taker with 13 wickets.

After four years playing at Coleraine as their overseas professional, Hume announced in late 2020 that he was moving to become Director of Cricket at Waringstown. Hume qualifies to play for Ireland in 2022. Speaking from home, the 30-year old was talking about the moment he received the call up from Chair of Selectors, Andrew White:

“It was a very exciting moment as I didn’t really expect to be going. It probably took a while to sink in. Also, knowing that I will be in the privileged position to travel at these strange times is something that I recognise.”

“I feel my 2020 season went pretty well, even though it was such a shortened season. Mainly being T20 cricket was strange, as it was hard to find your rhythm, but I was lucky to start well and things sort of grew from there.”

“I have spent most of my winter training and working on my fitness. Training indoors during the winter is something I’m not completely use to yet, but it’s about making the most of it and always trying to make yourself a better cricketer. Fitness-wise I’ve been lucky to live near a forest, so it’s been good to get in there a few times a week and do some running. Also Brendan Connor [Ireland Men’s S&C Coach] has given me a few home workouts to do, which have been fun but hard work!”

This won’t be Hume’s first trip to Asia for cricket:

“I was lucky enough to tour Bangladesh in 2011, so I have a fair idea of what to expect. I remember the wickets being quite slow and good for batting. And it was also pretty hot and very humid.”

“With regards to my game, I have an idea in my head about how I will want to go about it in those conditions. You always go into games with a plan, but in the end every cricket pitch is slightly different, so it’s about being able to adapt and workout the best way to go about things on the day.”

“Having Stuart Barnes on-board will be great. I was lucky enough to have a few sessions with him before he went off to the UAE, and it will be a great help having him there in Bangladesh and being able to bounce ideas off him. Especially with him having worked out there and having a great understanding of the local conditions.”

Hume played a single four-day match for Shapoorji Pallonji Cricket Ireland Academy versus Gloucestershire 2nd XI in 2019, scoring 47 and 10* with the bat, and taking 3-45 with the ball.