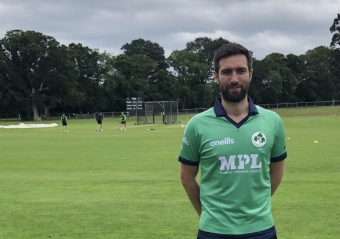 Andrew Balbirnie with MPL and Skoda on the kit

The announcement and sponsor unveiling was undertaken by video-conferencing, with the virtual press conference bringing together journalists from Ireland to India, and featuring Ireland Men’s captain Andrew Balbirnie and Irish international all-rounder Simi Singh.

ITW Consulting Private Limited is one of the top Global consulting and management firms. ITW specialises in crafting and executing multi-faceted brand management solutions & celebrity management across a vast number of arenas including the high profile worlds of Sports, Entertainment and Media. With a global presence and in-depth understanding of the International Sports and Media market, ITW works with clients to build stronger brand visibility, media buying, awareness and recall a wider target audience. Having transformed the sports marketing landscape with its disruptive and 360-degree solutions, ITW is among the fastest growing companies in Asia, and with its out of the box thinking and approach, has generated not just new marketing solutions for clients but also benchmarks and best practices that others in the industry are beginning to adopt.

The deal will replace Turkish Airlines in Ireland Men’s kit sponsorship category in a major boost for Cricket Ireland as preparations continue ahead of the England ODI series. The deal will also see ITW deliver in-kind services to Cricket Ireland to support its commercial and marketing objectives.

As shirt sponsorship rights holder, ITW will bring a number of major brands on-board to leverage the global profile of the Ireland Men’s cricket team and support Irish cricket. The first brands, which will feature on the kit during the upcoming ODI series are Mobile Premier League (MPL) and ŠKODA. “We are very excited to be associated with Cricket Ireland as their Exclusive Men’s Shirt Sponsorship Rights Holder & Cricket Ireland’s official strategic advisors on sponsorship, digital and research services for the next two years.”

“Global cricket’s potential is rich not just in the major cricket playing countries but beyond them as well, and Ireland is an exciting team and a fast emerging player on the world stage. Through this association, we want to fully get behind Cricket Ireland to enable them to grow further as a brand in India, because today India loves cricket, but not only India cricket.”

“We have already signed MPL (Mobile Premier League) as the principal front of jersey sponsor and ŠKODA has taken the official partnership with the leading arm branding for the upcoming ODI’s against England. We would like to encourage and bring onboard more Indian brands to sponsor international teams which will give them a global viewership and cost-effective Indian viewership. We would like to thank Warren Deutrom and his team and look forward to working with Cricket Ireland as a long-term and committed partner.”

“As One-Day International cricket finally returns, we are glad to be a part of its comeback by associating with the Ireland Men’s cricket team when they take on England. MPL stands for unearthing and showcasing talent, which the Ireland team has an abundance of. We look forward to the upcoming three-match series excitedly.”

“ŠKODA is celebrating 125 Years across the world and is spreading this message of celebration and being driven by Human Inventiveness. ŠKODA has been a patron of sports for over 100 years, tying up with various sports along the way. ŠKODA even holds a World Record for the “Longest Lasting Main Sponsorship of a World Championship in the History of Sport”. Everyone around the world is aware of India’s love for Cricket and it’s mass following across ages, irrespective of which two teams are playing and so we are happy to be associated with Cricket Ireland for this series. Our aim is to capitalize on the following of the Sport to further our message.”

“We are delighted to announce this new partnership today, and look forward to working Bhairav and the ITW team on this dynamic new partnership. ITW are not an unknown quantity to Cricket Ireland, as we worked closely with the group with the broadcast and production around the historic first men’s Test match at Malahide in 2018.”

“This deal is a testament to the growing strength and profile of the Cricket Ireland brand globally, and has already attracted two brand associations in MPL and SKODA that will add weight to our reputation in the sports market.”

“This is a good news day for Irish cricket during challenging times, and we welcome our new partners on board and hope this new partnership will be mutually beneficial for all involved.”