James McCollum At The Darren Lehman Academy In Adelaide 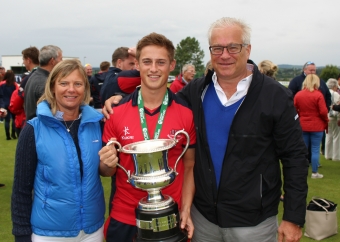 Waringstown’s James McCollum has been attending the Darren Lehman Academy in Adelaide, Australia for the past five weeks. With lots of rain falling on the Northland region of New Zealand this week and our Under 19s unable to play any cricket, it is the perfect time to hear how he is settling in and finding life Down Under;

It’s been just over five weeks since I traded the grey skies of Belfast for the promised sun drenched city of Adelaide. Needless to say, I think it’s rained more here than at home over the past month. “The wettest spring in South Australia since 1972”, classic luck of the Irish.

Despite the ropey weather, there’s been a lot of cricket played. I’ve been attending the Darren Lehmann Academy with 20 other players from around the world. The same Academy that has fostered the likes of Joe Root, Jason Roy, Liam Plunkett, Sam Billings.. the list goes on. It’s been pretty tough going; 4 yoyo tests every month (back to back yo-yos on testing day), 2 gym sessions, 2 cardio and 5 skills sessions per week. We practice on excellent grass pitches and I have really enjoyed working 1:1 with Head Coach Sean Siegert.

Then on top of that you’ve got club training every Tuesday and Thursday night with games at the weekend. It’s no surprise that I spent the first week crawling out of bed in the morning and probably spent more time in the ice baths than on the cricket pitch. Despite the fast paced schedule, the Academy creates an environment for players to take control of their own development and to put it simply, you get out what you put in.

Darren Lehmann aka ‘Boof’ has kindly taken time out of coaching Australia to lead a couple of seminars with the Academy, discussing different aspects of the mental side of the game, game plans within different formats, and performance evaluation which is something I’ve probably taken the most value from. With over 100 Aussie one day caps, 27 tests and a seriously impressive coaching resumé, he’s a pretty valuable asset to be able to tap into and a very down to earth bloke.

I’ve been lucky enough to be placed at Adelaide University CC which boasts one of the most picturesque grounds in South Australia with the Adelaide Oval a mere stones throw away from our clubhouse. The ‘Blacks’ have a seriously strong 1st Grade Squad; 4 State contracted players with the SA Redbacks, 2 of whom are regulars (Joe Mennie and Jake Weatherald), Sussex keeper Michael Burgess, Kent all-rounder Grant Stewart and Sri-Lankan ‘A’ batsman Dilshan de Soysa.

As you can imagine it’s been a tough team to break into; I started off in 2nd grade scoring 21 and 63 in my first couple of knocks before I made my T20 debut in 1st Grade, scoring 20 opening the batting in a friendly against SA Outbacks. I then made my competitive first grade debut in the West End One Day Cup in a top of the league clash against Woodville. Again, unfortunately “Irish Jimmy”, as they call me over, here failed to bring any of the clichéd luck associated with the shamrock as we suffered our first defeat of the season in 8 games alongside my first single figure score.

It’s been an extremely challenging and intense first 5 weeks with any sort of comfort zone both inside and outside cricket left behind at Dublin Airport. We’ve also got the inaugural day/night ashes test coming to Adelaide next Saturday which has warranted a state-wide break week for grade cricket. Boof has assured us a 4-0 walloping which he’s taken a bit of stick for from the strong English contingent in the academy who kindly reminded him that it would need to be or he’ll be out of a job! Regardless, you’ll find me in block 531 sitting in between 10 English diehards, cheering on any team competing against the ‘Pommies’.