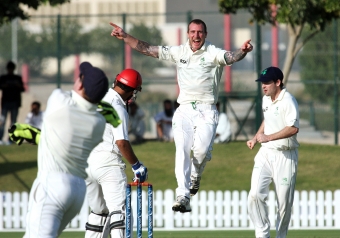 John Mooney has announced his retirement from international cricket with immediate effect.

“I’ve decided to call time on what has been a wonderful career in the green of Ireland,” said Mooney.

“At this stage of my career, I’m beginning to think about what comes next, especially commitments to my new gym and personal training business. I’ve always given 100% to the team, and it wouldn’t be fair on them to keep going if I’m not fully committed.

“I’ve also been playing internationally for 14 years and over the past few seasons have found that the intensity and demands of the modern game have placed a considerable strain on my body.  It’s also become increasingly difficult to spend such long periods of time away from my wife and young family.

Mooney is one of only four Irish players to play in three World Cups, along with the O’Brien brothers and Irish skipper William Porterfield. He admitted those competitions held a special place in his heart.

“I’ve some fantastic memories having played in three World Cups - the first of which in 2007 included my elder brother Paul. In 2011 I also had what I described as my ‘Ray Houghton moment’ hitting the winning runs against England.”

The North Dubliner paid tribute to those who had helped him in a memorable career in which he won 182 caps.

“I’ve worn the jersey with pride and passion in the last 14 years and would like to thank my family, team mates, support staff and Cricket Ireland who have helped me during what has been an incredible journey.”

Irish skipper William Porterfield paid tribute to Mooney saying: “There are few players who have worn the Irish jersey with as much pride as John Mooney. His passion, fighting qualities and enthusiasm meant he was always someone I was glad was playing for me rather than in the opposition ranks.

“He would always put the team first no matter what you asked him to do, should that be opening the bowling or fourth change he always put the side first. He epitomises what it means to put on the Irish Jersey.

“Of course he’ll always be remembered for the game against England in Bangalore but for me his bowling display in the ICup win over Afghanistan summed up for me what he was all about. He led the attack after Trent went off injured and took 10 for 81 on a batting paradise in difficult conditions.  I would personally like to thank him for everything that he has done for Irish cricket.”

Cricket Ireland Head Coach John Bracewell thanked Mooney for his commitment and service to Irish cricket: “John Mooney has been an iconic figure for Irish cricket where his passionate and talented displays played an integral part in our success.

“His longevity in a 14 year career is testament to both his talent and his consistency - he rarely let his team down and it’s no coincidence that he was involved in so many key moments in Ireland’s triumphs over the years.

“I’d like to thank him for his efforts over an illustrious career, and wish him and his family all the very best in the future,” concluded Bracewell.

He also took 144 wickets at 27.29, which included a Man of the Match ten wicket haul against Afghanistan in 2013 as Ireland claimed their fourth ICC InterContinental Cup title.