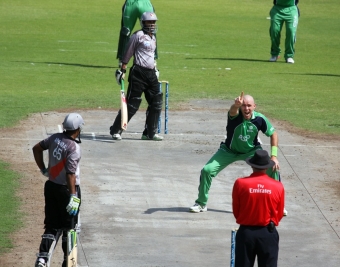 The win takes the Irish six points clear at the top of the World Cup qualification table, tantalisingly close to yet another appearance on the world stage.

With four games remaining in the tournament, such is the strength of their run-rate that one win in their double-header fixtures against The Netherlands (in July) or Scotland (in September) would see the Irish on the plane to Australia in 2015.

Former skipper Johnston (4-25) was at his inspirational best, taking the early wickets of Shakoor and Asif, and then returning to remove the dangerous Swapnil Patil and Khurram Khan, both of whom made 30.

In the process Johnston became Ireland’s 3rd most successful bowler after overtaking his former team-mate and current Irish selector, Kyle McCallan. Johnston’s haul now stands at 257 wickets, with only Dermott Monteith (326) and Jimmy Boucher (307) in front of him.

Shaiman Anwar (39) added 60 for the 6th wicket with Rohan Mustafa (19) as the Emiratis rallied to 140 for 5, but another spectacular catch by William Porterfield broke their stubborn resistance.

Alex Cusack (2-40) was passed fit just before the start of play in an unchanged Ireland side, while the other wicket takers were John Mooney (2-46), George Dockrell (1-28) and Paul Stirling (1-37).

A final UAE score of 196 was felt to be 20-30 runs short of par at the half-way stage, and thus it proved in the final analysis.
Ireland captain William Porterfield had talked before the match about the need for batting discipline, and he led by example, top scoring with 77 in a thoroughly professional team performance.

The batting solidity blunted the UAE enthusiasm, with partnerships the whole way through the innings, never allowing their opponents any momentum.

The Irish captain was dismissed with the total on 138 for 4, but any concerns his team-mates had were quickly dispelled as Gary Wilson overcame a shaky start to make an unbeaten 39, The Surrey batsman shared an unbroken 5th wicket partnership of 61 with Kevin O’Brien (25*) as the vital win was secured with 14 balls to spare.

Johnston was delighted with both his own personal form and that of the team as they took one step nearer to automatic qualification. “It was a great performance and fantastic to get four points. It was very hard to come here and get two wins from these guys. They were unbeaten in four games at home, so we probably have one foot on the plane to Australia. We haven’t spoken about it yet but Simmo (Phil Simmons)  will want us to go out and win those four remaining games and finish on 25 points (out of 28) - That’s our goal.”

With the tournament 22 months away, Johnston who turns 39 next month admitted it was just too much to ask for him to be there in a playing capacity: “I won’t be on that plane unless Phil wants a bowling coach or something like that. It’s too far away.

“My only concern is to get the guys on that plane and come back here in December and win the five-day (Intercontinental Cup) final,” the veteran seamer added.

“I’m still enjoying it and whether it’s four wickets or no wickets if we win games that’s all I want to be part of. It’s great going out to play cricket with these guys and we’ve been pretty successful for a long period of time and hope it can continue.”

A beaming Ireland captain William Porterfield was delighted with the way the team approached a potentially difficult run chase: “It was nice to come through the way we did. It was something we wanted to address after Monday and we did that and came home pretty comfortable in the end.”

Was it a nervous Irish dressing room as the overs began running out? “No nerves at all. Their total just below par on that deck but we got out of what we wanted. If you had given us 197 to chase at the start of the day, we would have taken it and 46 off the last 10 with six wickets left, we would have snapped your hand off. We showed great professionalism today to see it through.”

On the form of Gary Wilson who yet again was there at the end to bring the team home: “It’s great to see Gary seeing the job through. He’s played well in the last three games. I probably should have been there with him but we still had Kevin and John Mooney to come so more exposure we can get in these scenarios the better it going to be for ourselves.”

The skipper was full of praise for Johnston who was the stand-out bowler on both sides: “Trent just keeps going. You know exactly what you’re going to get when you throw him the ball. To come through nearly nine overs on the bounce in that heat was a special effort.

“Trent leads from the front and it’s great to have him in the side. The more games he can play for Ireland the better it will be and the easier for me as skipper. Alex Cusack and John Mooney also did well in that heat.”

The Warwickshire batsman is keen to get qualification sewn up as quickly as possible, but is determined to win all the remaining fixtures; “You want to win every game you play for Ireland. We can probably qualify in Holland with one win - two wins for sure - and that’s what we’ll be aiming to do. We know what potentially there will be at the end of it and are going for it.”

Those games against The Netherlands will be in Amsterdam on July 7th and 9th, with the final two games scheduled for Stormont on September 6th and 8th.

Ireland are back in action tomorrow (THUR) when they take on UAE in a T20 game which takes place under lights staring at 2pm (UK/Ireland).