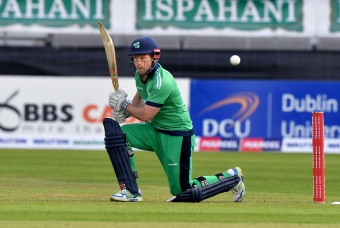 Ed Joyce returns to the Ireland squad for a tri-series against Scotland and hosts UAE in Dubai next month.

The Dubliner missed the recent ICC InterContinental Cup and ODI series wins over Scotland and Afghanistan with a knee injury, but has recovered fully to take his place in the 15-man squad.

There’s a also a return for Donemana all-rounder Andy McBrine, replacing Tim Murtagh who is being rested for the tour.

“We can’t underestimate how good the series win in Sharjah was against Afghanistan. It was undoubtedly one of the most satisfying for the players and staff in recent times,” said Chair of Selectors Andrew White.

“We’ve opted to leave Tim Murtagh at home to prepare for the long tour of South Africa and Zimbabwe as the staff continue to manage his workload.

“We are boosted by Ed Joyce’s return after his injury lay-off, while Andy McBrine will add his all-round quality to the squad,” added White.

It’s a first tour in charge for new Ireland Head Coach Graham Ford who took over the reins from John Bracewell earlier this month.

“The lads will be looking to build up more positive momentum prior to the World Cup Qualifiers, gaining confidence from those recent wins in the last month,” said Ford.

“There is plenty of hard work needed through this crucial preparation period. The players are very much up for it and realise the importance of making the most of this game time in the sunshine and outdoor facilities.

“We are grateful to the Emirates Cricket Board for hosting the tournament at relatively short notice.”

Although not part of the squad, Craig Young will travel to Dubai, where he will bowl to the squad as he continues his rehabilitation from an elbow injury.

Ireland take on UAE on January 11 and 13, followed by two matches against Scotland on the 16th and 18th. All four ODI’s will take place at the ICC Academy ground in Dubai.