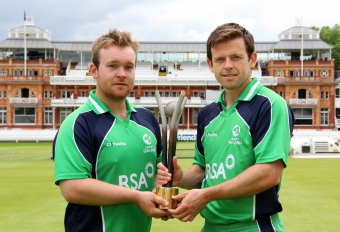 Two of Ireland’s star batsmen today launched the RSA Challenge which will come to Malahide on September 3, as they showed off the RSA Challenge Trophy at Lord’s Cricket Ground in London two months ahead of the big game.

Joyce, who has been in superb form for both Ireland and Sussex this season, is relishing the opportunity to take on England as Ireland attempt to claim yet another famous scalp.

The 34 year-old left hander said: “Irish cricket’s big game in 2013 is against England and after a couple of near misses against Pakistan in May, the whole squad is keen to make amends against England in September.

“I can’t wait to play against England in front of what is set to be the biggest crowd ever seen at a cricket match in Ireland at our new ODI venue in Malahide, there’s talk of Malahide becoming a Fortress for Irish cricket and we’re looking forward to the first visitors to Fortress Malahide being England.”

“It should be a magnificent occasion and it’d be a great achievement if we can get another famous victory against one of the world’s best teams.”

The match is on course to be a sell-out and Paul Stirling, who is currently ranked an Irish record 8th in the World in the Reliance ICC Batting Rankings, urged fans not to miss out on the chance to see some of the top stars in world cricket in action.

“It’s fantastic that there’s been so much interest already in the fixture, and it’s bound to be a really special atmosphere. Games between Ireland and England in any sport have that extra edge, and that’s certainly the case when we play them on the cricket field.

“There’s no doubt they’re still hurting after we pulled off the greatest upset in World Cup history thanks to Kevin O’Brien’s record breaking hundred. The team has obviously great memories of that never to be forgotten night in Bangalore but we’re keen to create new ones now.

“We’ve come close to beating them twice in Ireland as well as that win in India. We lost by just a few runs in Belfast and Dublin, so we want to get a win on home soil. With England being the first international visitors to Fortress Malahide, we’re laying down the Challenge to them for September 3rd.”

Stirling was also looking forward to the prospect of facing his Middlesex colleague Eoin Morgan in the September 3rd show-down.

“With players of the calibre of Eoin Morgan, Alistair Cook, Graeme Swann and Kevin Pietersen in the England ranks, it’s sure to be a tough challenge but a great treat for the fans.”

Ireland are currently in action in Holland where this afternoon they reached the InterContinental Cup final dismissing The Netherlands for 127, to win by a mammoth 279 runs.

The sides meet again on Sunday and Tuesday in two crucial World Cup Qualifiers, where wins in both would see Ireland become the first team to secure one of the two automatic places at the 2015 event in Australia and New Zealand.

The game at Malahide looks certain to be the highest ever attendance at a match in Ireland, and with the RSA Challenge being an official ‘The Gathering’ event Cricket Ireland has put together an attractive package for England fans wishing to attend the game and come and experience the legendary Irish hospitality in Dublin.

For just £159 per person sharing, fans can stay for two nights at the four-star Bewley’s Hotel at Ballsbridge with return airport transfers by luxury coach, and a ticket for the game in the England section.

Tickets for the match can be purchased via Ticketmaster – www.ticketmaster.ie . Cricket Ireland is calling on all sports fans to get their tickets now in advance of the match for what is certain to be a memorable occasion for Irish Sport.