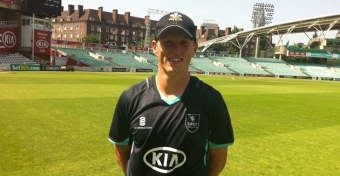 Kevin O’Brien has signed a short-term deal with Surrey which will see him play for the club in three Friends LifeT20 matches before he jets off to the West Indies to play in the Caribbean Premier League for Trinidad and Tobago Red Steel.

Surrey will be the fourth English county that O’Brien has played Twenty20 for, following spells with Nottinghamshire, Gloucestershire and Somerset. He also had a brief trial with Durham, playing one game for their second XI.

The week long deal will see the Ireland vice-captain make his Surrey debut in the home clash with Hampshire tomorrow (FRI) evening, before playing against Irish colleagues Paul Stirling and Tim Murtagh at Lord’s on Thursday 25th. He finishes at the Oval next Friday versus Kent.

O’Brien spoke of how the move came about: “I got a call directly from Alec Stewart while I was playing in the recent World Cup Qualifiers in The Netherlands. Glen Maxwell is playing for Australia A and I’m stepping in to replace him in the squad. It gives me a chance to play some top quality T20 cricket before heading off to the Caribbean. I hope to do really well for Surrey who have started the competition fairly well winning four of their first six games.

“It’s great that there’ll be a familiar face in the dressing room with ‘Willo’(Gary Wilson)  there. We’ve had some great partnerships with Ireland over the years and hopefully we’ll be able to do the same with Surrey.”

It was a cause for double celebration for Gary Wilson, who in addition to the news that he’ll be joined in the Surrey ranks by O’Brien, today signed a new two year deal which will see him remain at Surrey until the end of the 2015 season.

The wicket-keeper batsman spoke of his delight at securing the new contract: “I’m obviously ecstatic at getting the new deal. I’ve always wanted to stay at the club and I’m happy that my form this campaign has been rewarded.

“It’s great news that Kevin is playing in the T20 for Surrey, and I’m sure the fans will really enjoy watching him in action.”

The Surrey squad to play the Hampshire Royals in the Friends Life t20 at the Kia Oval on Friday 19th July: