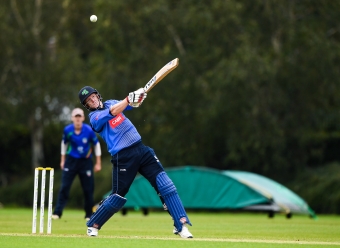 DUBLIN – Irish international Kevin O’Brien smashed 82, including 8 sixes, in a 37-ball assault on the North West Warriors attack in Leinster Lightning’s win today during a rain-affected Test Triangle Inter-Provincial Series match at Pembroke. However, it later transpired that one of O’Brien’s sixes smashed a car window in the adjacent car park – his own.

In a T20 match reduced to 12 overs-a-side due to rain interruptions, O’Brien was a bright light on a dull day. He struck his second ball for the first of his eight maximums and didn’t let up, despite the risk of his momentum being broken going off for a mid-innings rain break.

His Leinster side finished with an impressive 124-4 from 12 overs, leaving the visiting Warriors a near-impossible task of chasing down the massive target in dull, damp conditions.

The Warriors lost wickets early in the response, and apart from William Porterfield’s 50 from 30 balls, never looked likely to threaten the Lightning, with the Leinster side eventually winning by 24 runs (DLS method).

Despite having a superb day with the bat, O’Brien will unfortunately face a windy car ride home after causing this damage to his own vehicle: