Kevin O’Brien to support cricket in Munster this Easter 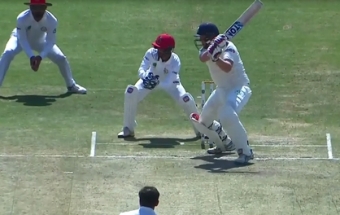 Kevin O'Brien is heading to Lismore CC this Easter

Irish international Kevin O’Brien, having recently returned from the Afghanistan series in India, isn’t one to simply put his feet up - he is preparing to continue his work sharing his experience and knowledge with club cricketers this Easter when he heads to Munster to run a training camp with Lismore Cricket Club.

Now with more than 330 caps for Ireland, and fresh from scoring a half-century in the second innings of the recent Test match, O’Brien is back home in Dublin and looking ahead to the domestic season.

“It’s great to be back home after a challenging six weeks in Oman and India. There was some tough cricket on the field, but definitely one of the exciting outcomes of the tour was the emergence of some of the new players into the senior set-up – the likes of James Cameron-Dow and James McCollum – taking their chances and earning their places in the side. What this reinforced for me was the need to support the development of the game at home and help with bringing through that next generation of talent.”

“So I’m delighted to be heading to Munster this Easter and work with Lismore Cricket Club through my Cricket Academy. Cricket is growing in Munster, and success on the field is following – just look at the progress Limerick made in getting to the National Cup Final last year.”

“I’ve been very fortunate to have played cricket all over the world and learned so much by playing against, and with, some of the world’s best players. So, being able to share my knowledge and experience to help local cricket clubs across Ireland develop is part of what I consider being able to give back to the sport that has given me so much.”

O’Brien’s work, through his Kevin O’Brien Cricket Academy, comes after his recent partnership with Monaghan Cricket Club in 2018, and while he is excited by the prospect of engaging with the club, the visit goes far beyond just the benefit of a one-day training camp.

Watch: Kevin O’Brien compiles 56 during the second innings of the Test match

“In rural Ireland, it is a real challenge to give local kids opportunities to meet and train with the Irish cricket stars they follow. We approached Kevin last year about organising an easter workshop for local kids interested in cricket. We want them to get inspired and engaged with the club for the season ahead. Kevin has been just brilliant in helping make this happen and already there is a buzz and excitement around the place – they can’t wait till the 15th April!”

“We see real potential in these types of initiatives where Irish cricket stars connect with local clubs to inspire youngsters across Munster. This event will feed into future initiatives brought forward by the MCU Participation and Pathways Committee – a newly formed committee whose objective is to grow participation in cricket and establish a solid foundation for the game in the Munster region with a particular focus on developing cricket at youth level.”