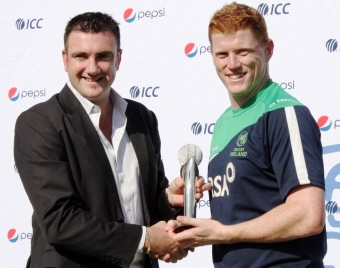 Kevin O’Brien may be on the pitch in Dubai as the ICC Intercontinental Final continues but he will receive some good news when the final ends as he has been named as the winner of the Associate and Affiliate Cricketer of the Year.

The announcement was made ahead of the broadcast of the LG ICC Awards 2013 TV show which premieres on Saturday (14 December) in most countries across the globe. The show is hosted by former Australia captain Ricky Ponting who won the Sir Garfield Sobers trophy in 2006 and 2007, ICC Test Cricketer of the Year in 2006 and was appointed captain of ICC’s ODI Team of the Year in 2007, 2008 and 2010.

Clarke was earlier named in the ICC Test and ODI Teams of the Year in Mumbai on 3 December. In the same event, India captain Mahendra Singh Dhoni was revealed as the LG People’s Choice award winner.

England’s Sarah Taylor clinched the ICC Women’s T20I Cricketer of the Year award for the second year in a row, while Sri Lanka’s Mahela Jayawardena won his second ICC Spirit of Cricket award, this time for walking without waiting for an umpire’s decision when batting on 91 against New Zealand in Galle in November 2012.

In total there are 11 individual awards, as well as the two ICC Teams of the Year – for Tests and ODIs. ICC President, Alan Isaac, said: “I’d like to congratulate all of the winners announced today, who are all highly deserving of their awards. It’s been a fantastic year of cricket and I think a special congratulation is needed for Michael Clarke, who claimed two awards this evening, including of course the prestigious Sir Garfield Sobers Trophy for ICC Cricketer of the Year.

“I would also like to extend my thanks to all of those on the Selection Panel and the various Voting Academies who gave up their time to vote for the various awards.”

ICC Test Team of the Year is as follows (in batting order):

ICC ODI Team of the Year is as follows (in batting order):