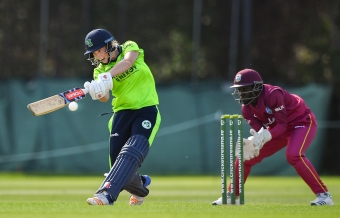 DUBLIN – Ireland’s all-rounder Kim Garth has been announced as caretaker captain of the Ireland Women’s cricket team for the remainder of the West Indies series following an injury to permanent captain Laura Delany that will see her out of the game for up to four weeks.

Dublin-born Garth, 23, is the current national vice-captain, and has led the national side on two previous occasions. Making her debut in 2010, she has 104 caps and was part of the successful Sydney Sixers squad that won the Australian Women’s Big Bash League in 2017 and 2018.

Garth hit her highest T20 international score of 46 in yesterday’s loss to the visiting side, after finishing with an economical 1-19 off four overs with the ball.

“We are all thinking of Dellers [Laura Delany] at this time. It was an unfortunate but painful injury she sustained and we look forward to seeing her back on the field as soon as she recovers. Despite the circumstances, it’s always a privilege to take on the captaincy of a national side and I look forward to the challenge over the next two matches. The West Indies showed why they are rated one of the world’s best sides, but we know that our squad contains a lot of promise, so it’s a matter of getting back out there and showing the world what we know we can do.”

Garth was one of six players to be awarded a part-time professional contract recently, about which she said:

“It’s obviously hugely exciting for me, and to be a professional cricketer is something I’m very proud of. To have the opportunity to be in a profession I love and I’m passionate about is amazing and I’m looking forward to hopefully making big strides in my game as a result.”

The injury to Laura Delany came late in the West Indies innings. Bowling the last ball of the 18th over, Delany bowled a full length ball to Windies batter Shemaine Campbelle who powered it straight back low and hard at Delany. The ball struck Delany on the inside of her ankle, and despite her best efforts to stand and put pressure on the ankle, she had to be helped from the field and was transferred to a nearby hospital for treatment and a precautionary scan. She will miss up to four weeks as she recuperates from the blow.

Mary Waldron will become the vice-captain for the series, while Anna Kerrison has been called up into the squad as a replacement for Delany.

There is free entry to all matches.

Livestream of the series

In a boost to the profile of Irish women’s cricket to be shown globally, the series is being livestreamed, with details posted on Cricket Ireland social media channels. The livestream will be produced in partnership with HBV Studios.