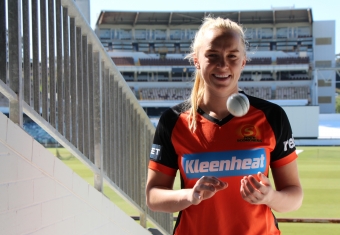 PERTH, Australia – Ireland Women’s vice-captain Kim Garth will return to play in the Women’s Big Bash League in Australia after signing with the Perth Scorchers.

Having played in the Rebel Women’s Big Bash League during the second and third editions of the competition, the 23-year-old said she’s excited to be back playing in Australia:

“It came to me as a bit of a shock, I was playing in a World Cup qualifier at the time and when I heard the Scorchers wanted to sign me I was over the moon. It’s incredibly exciting to be back playing in the Big Bash, it’s the best domestic competition in the world and it goes from strength-to-strength each year. We have some incredible players this year with the likes of Meg Lanning and Nat Sciver, so I’m most excited about hopefully learning of those guys and challenging myself against the best in the world.”

“I didn’t know many of my teammates before joining up with the squad this week, so it’s been exciting coming into a new team and seeing how they go about their stuff. They’ve been very welcoming so far and have made it very easy for me. As for the city, I’ve visited Perth a couple of times, it’s a brilliant place and I can’t wait to get started.”

Garth was part of a successful Sydney Sixers squad during the 2016-2017 and 2017-2018 competitions, during which time her side won two titles. Garth’s last appearance in the WBBL was the Final in February 2018 when the Sixers defeated the Scorchers in the decider. Garth made an important contribution to the win taking 1-7 from 2 overs, which followed on from an equally impressive performance in the preceding semi-final where she claimed 2-14 from 3 overs. “It’s great to see Kim back playing in the Big Bash competition, she comes into our squad with valuable WBBL experience and had a great impact with the ball. I’m really excited with the squad we have put together, we have great flexibility across the board which will be the key to our campaign.”

“I’m looking forward to seeing everyone in action this season. We’re all itching to get going with the competition, the momentum of the WBBL has been building nicely and people know how exciting the product is. The opportunity we have to help take the game to the next level is in front of us and we’re ready for the challenge.”