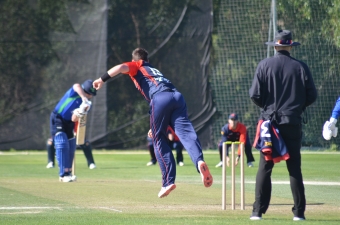 LA MANGA, SPAIN - An 87 from Marc Ellison, an all-round display by Mark Adair and a five-wicket haul from Harry Tector saw the Northern Knights home in a comfortable victory over the North West Warriors in the Test Triangle Inter-Provincial Cup today.

Warriors captain Andy McBrine won the toss and elected to bowl first on a pitch that had seen some significant rainfall over recent days. The match experienced a delayed start, and was eventually declared a 36 over-a-side affair.

The sun may have shone overhead, but it did not shine on the Warriors bowling attack with the Knights batters mounting a total of 265-6 from their allocated 36 overs.

Knights opener Marc Ellison hit a List A career-best 87 from 91 balls to lead the charge, while a whirlwind 44 from 15 balls by Mark Adair threatened run-scoring records before he fell to an excellent outfield catch by Graham Kennedy. A solid 40 from captain Gary Wilson, and a breezy 36* from 14 balls at the end by Harry Tector saw the Knights post a highly competitive total.

For the bowling side, Stuart Thompson claimed 4-55, his best List A return, but most bowlers suffered at the hands of the Knights batting unit who collectively hit 152 runs in boundaries (including 23 fours and 10 sixes).

With a target adjusted by DLS, the Warriors soon found themselves at 48-6 in less than 15 overs - the top order destroyed by the pace of Adair (3-29) and spin of Harry Tector (5-36). After a further three wickets fell, the Warriors were facing their lowest Cup total at 78-9. However, a tenth-wicket partnership between Andrew Britton (36*) and Craig Young (27) - both personal best batting performances in List A matches - put some respectability in the total.

The last Knights wicket, quite rightfully, fell to Tector and the Knights recorded a resounding victory over their northern rivals.