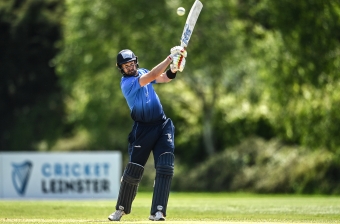 DUBLIN – Barry McCarthy lit up his home club ground of Pembroke with a dazzling maiden List A century off 55 balls, to rescue his side from a precarious position before George Dockrell bagged five wickets as Leinster Lightning overcame Northern Knights in the final match of the Inter-Provincial Cup in 2022.

McCarthy’s previous best List A score of 43 was left in his wake as he plundered 110 from just 59 balls, featuring four fours and 10 sixes. With Match Referee Phil Thompson regularly pacing out to the middle with a new ball, McCarthy brought up his maiden century with a fast-run two, becoming one of only five men in List A history to score a century batting number 9.

Earlier in the day after being sent into bat first, the Lightning openers Simi Singh and Cormac McLoughlin-Gavin got off to a sprightly start, striking 40 runs from the first six overs. Singh was the chief aggressor, smashing two sixes and two fours in an early assault on Knights’ captain Mark Adair. He then added a third maximum off Tom Mayes in the 8th over, before swinging across the line to a Ruhan Pretorius in-ducker and losing his off stump – out for 33 from 22 balls.

Andrew Balbirnie joined McLoughlin-Gavin at the crease looking to sustain the run rate, but a tighter line by Mayes (3-69), Pretorius and then Matthew Humphreys slowed the Lightning’s progress. With just 28 coming from eight overs, Mayes began to cause some difficulty with his extra bounce and variations of pace. He took two wickets in three balls in the 17th over – Balbirnie (9) and Tim Tector (0) – putting the Lightning on the back foot.

At 166-7 in the 33rd over, the Knights looked well on top – but where cricket giveth, it can also taketh away – and the eighth wicket pairing of Barry McCarthy and Gavin Hoey began a remarkable counter-attack. The pair hit 88 from 73 balls, McCarthy plundering 61 of the runs from just 38 balls faced. The partnership swung the momentum towards the home side, and despite Hoey losing his wicket for 24, McCarthy continued the batting barrage.

McCarthy followed up the 88-run eighth wicket stand with a 59-run ninth wicket partnership with Josh Little, and when the Lightning innings was brought to a close on 315-9, the home side had smashed 114 runs off the last 10 overs.

With all the momentum of the match shifted into Lightning’s favour, the Knights batters needed a resolute and positive start. Ani Chore (20 from 24 balls) looked solid before thought he had flashed a ball wide of gully, only to watch on as Dockrell pulled in a spectacular diving one-handed catch.

James McCollum (41) and Pretorius (30) then put on 60 runs for the second wicket, before McCollum top-edged Dockrell on the sweep to be caught by Tucker and Pretorius played a lofted off-drive straight to long-off, giving Amish Sidhu his first wicket in Lighting colours. Dockrell then darted one through the defences of Mark Adair, bowled for 8, and the Knights had lost 3-12 in two overs to be staring down the barrel of a big loss.

It was then that Neil Rock and Cade Carmichael came together. The pair played without restraint and pushed the run rate upward – Rock bringing up his third career List A half-century from just 31 balls, while Carmichael supported Rock while still tipping along at a strike rate of over 120. From a position well behind the run rate required, the Rock-Carmichael partnership soon had the Knights in a position of near parity, but after amassing a 119-run stand in only 83 balls, McCarthy broke through by dismissing Carmichael for 43 off 35 balls – feathering a bouncer through to the keeper.

Rock tried to continue on his merry way, joined by Ross Adair, but it was McCarthy’s day as he accounted for Rock on 81 from 58 balls (9 fours, 4 sixes) miscuing a pull shot to be caught at cover by Hoey.

From there the ending seemed inevitable – the final four wickets fell for 5 runs and the Knights succumbed to defeat by 54 runs. Lightning skipper Dockrell finished with 5-49, while batting hero McCarthy finished with 2-32. McCarthy was named Player of the Match.

That was the final match of the Inter-Provincial Cup competition with the Munster Reds being crowned champions for the first time.