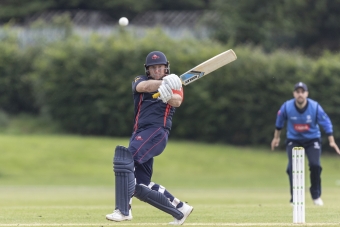 Gary Wilson's 35* led his Northern Knights side to victory

The Northern Knights put in a brilliant all-round performance to comfortably beat Leinster Lightning by seven wickets and record their fourth win in Sydney Parade in the last week.

Despite losing the toss and finding themselves bowling first, the Knights were clinical in every facet of the game on a glorious day in Dublin. It was Graeme McCarter and Mark Adair that started off the good work for the away side. Adair was the first to strike, when his away swinger took the glove of Jack Tector and went into third slip’s hands in the second over. In the next over, Gareth Delany fell in carbon copy style off McCarter’s bowling. When Lorcan Tucker chased a wide ball and nicked off to Adair, the Lightning was left 4-3.

They badly needed to consolidate and Andrew Balbirnie and Simi Singh did just that. Seeing off the new ball with some very tight bowling, they dug in very well and continued to kick on afterwards. Singh was the more aggressive to start, pulling well for a couple of boundaries. He had made his way to 44 and had brought the Lightning to 75-3 when he departed, trapped LBW by Shane Getkate. The Knights bowler struck again to remove Kevin O’Brien soon after, when he feathered a ball down the leg side.

Getkate continued to cause problems and he got his third when a ball that stuck in the pitch prompted Dockrell to push a regulation catch to mid-off. This had reduced the Lightning to 80-6 and they needed to build again with Tyrone Kane joining Balbirnie. They temporarily did this but it was the introduction of Jacob Mulder that made sure that the Lightning innings came to a premature close.

He clean bowled Kane courtesy of a chop on for 10 and soon after, he took the prize wicket of Balbirnie for 41, clean bowling him also. The tail failed to wag as it was James Cameron-Dow who trapped Josh Little LBW, before Mulder, who finished with 3-5, removed McCarthy caught behind. The Lightning had fallen to a below par 114. Getkate with 3-18 and Adair with 2-18 were the other chief wicket-takers.

Often teams can get into trouble with these sorts of run chases if they don’t make a positive start. The Knights signalled their intentions by sending in Mark Adair to open the batting. He did what his game allows, and carted a couple of early boundaries to get the Knights off to a good start. However, Peter Chase induced an edge from James McCollum’s bat to get a quick breakthrough for the Lightning.

Adair continued on remorselessly during his quickfire 27, which came up off only 17 deliveries. Chase found a way to strike again, when Adair mistimed a pull shot and was well caught by Delany, who made good ground to complete the catch. Marc Ellison fell soon after when getting clean bowled by Barry McCarthy and the Knights had slipped to 44-3 and there was a feeling of a slight collapse in the air.

Knights captain, Gary Wilson joined Harry Tector and they reassured the Knights dressing room. Both of them batted with a lot of common sense and ability. They picked off singles at will before cashing in on anything loose from the bowlers. To their credit, the Lightning stuck to their guns but there was simply not enough runs to work with on this pitch. Courtesy of the two set batsmen the Knights ended up sauntering to victory by 7 wickets with 28 overs to spare, both Tector and Wilson finishing on 35*.

This result keeps the Test Triangle Inter-Provincial Cup up in the air and still all to play for with still two games to play.