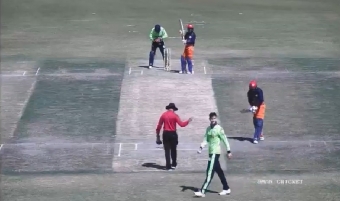 MUSCAT – Omani middle-order batter Suraj Kumar hit an unbeaten 56 off 41 balls as he led the Oman Development XI to victory over Ireland in a warm-up match at the Al Amerat Cricket Ground in Oman.

The match was Paul Stirling’s first in a captaincy capacity and Harry Tector’s first appearance in the senior men’s side.

Underneath blue skies and comfortable temperatures in the mid-20s, Ireland lost the toss and was sent in to bat first. Despite two boundaries in the first three balls of the innings, Stirling fell early for eight, and the visiting side’s top order failed to fire finding itself 47-6 at the 10-over mark of the innings.

A solid late-order batting display, led by George Dockrell (26* from 22 balls) saw Ireland finish with 112-8 from its 20 overs.

In response, the home side’s opener Sanuth Ibrahim got off to a flyer, making 28 from 16 balls, and the Omani’s made to 55-3 after 7 overs and looking confident. Captain Stirling then turned by Simi Singh, whose first ball spun past the bat of Ayaan Khan and clean bowled the left-hander. A mix-up two balls later saw the Omani’s lose their fifth wicket, and sitting at a precarious 55-5 with 58 runs still for victory.

Up stepped the 30-year old middle-order batter Suraj Kumar who belted 56* from 41 balls, including three sixes and four fours. Kumar had scored 16 run in his last four innings for the Oman senior side, however today displayed some devastating shots to not only find the gaps, but clear the boundary three times off Ireland’s pace attack.

Oman completed the run-chase with 116-6 from 15.2 overs. The two sides meet again in a second warm-up match at the same venue tomorrow.

“It was a tough start but it was just nice to get out onto the cricket field and get the team together after four months of being away - and that’s how it panned out as well, so we can only really improve from what happened today. We need to get out there again and show what we’re capable of tomorrow.”

“With the batting, I think it is just a case of being indoors for the winter. We were hitting a lot of the fielders, and the ones we did manage to hit well went to boundary fielders are were caught. So we need some tidying up on that and work hard in the nets to make sure that we’re not just going through the motions. So, again, it will be good for us to play another game tomorrow and hopefully come out the other side to give us the confidence going into next Wednesday.”

Asked about whether he saw much of a difference in how we should approach batting first or second in a T20, he said:

“I think it’s two different skills - defending with the ball is something we need to work on as well. I think it’s just case of us improving each game. Batting first you have to look at the ball a little more and give yourself one or two overs at the start, but everything else is pretty similar.”