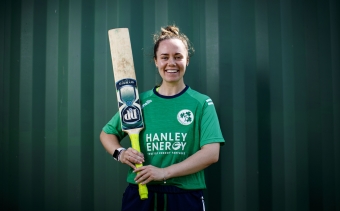 Laura Delany will lead the side out against Netherlands tomorrow

HARARE, Zimbabwe – Ireland Women’s captain Laura Delany said today that her squad is determined to use yesterday’s loss to the West Indies as a spur to their qualifying campaign ahead of tomorrow’s crucial match against the Netherlands in the ICC Women’s World Cup Global Qualifier.

Despite an impressive start to the match yesterday, Ireland eventually succumbed to the Caribbean side by 6 wickets, however, fought all the way demonstrating a never-say-die approach to their game.

“Gaby [Lewis] and Leah [Paul] started off well yesterday, which is pleasing to see their good form continue on from the Zimbabwe tour from last month. They put on some great partnerships during that series, and have batted well together at the Super series level over the last two years. It’s great to see that translate into international performances at this level, and I hope they continue to cement their roles in the team as our opening pair in this format.

“After the opening stand, we then lost a few wickets in quick succession. As a batting unit we know that we are capable of a lot more and, hopefully, we will display this over the next few days.

“I was delighted to have Eimear [Richardson] back in the side after she missed last month’s tour - she’s a very skilled player, and has a lot of experience, so it’s great to have her back around the group.

“Our bowling attack bowled well in the middle period, but we didn’t take early wickets in order to build pressure, and Deandra Dottin played incredibly well. We just didn’t have enough runs on the board, but I was pleased with how the bowlers acquitted themselves and how we took it into the 40th over.

“I said yesterday after the match, we know we haven’t played our best cricket yet, and there are two matches still to go, so we’re looking ahead to Netherlands tomorrow and Sri Lanka on Monday to show what we can do.”

All fixtures in the Qualifier tournament will be livestreamed through www.icc.tv.