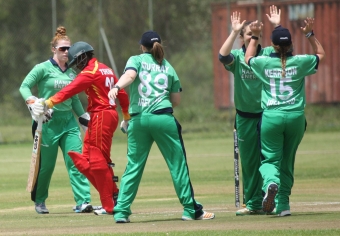 Another wicket celebration during the T20

With the cancellation of the final T20 this morning, the Ireland Women’s team has completed its rain-affected tour of Zimbabwe buoyed by the experience and emergence of several young players despite frustrations over the weather, said Aaron Hamilton, Senior Women’s Head Coach.

“No cricket tour is ever a wasted trip, despite the obvious disappointment at seeing so many days of cricket lost due to rain, I was encouraged by the squad’s performance,” said Hamilton, who took over the Head Coach role in 2015.

“The group we took away was a young team, and we used the opportunity to expose the new players to life on tour and an international travel experience. The cricket that we played was competitive, but the benefits of an experience like this professionally and personally will benefit their careers.”

“The senior players really stood up on tour, with stand-in Captain Mary Waldron leading the team well, Isobel Joyce delivering consistent all-round performances – including a career-best 91 not out in the second one-day match, and Rachel Delaney delivering when the moment required.”

Hamilton, who originally hails from Queensland, was quick to also acknowledge the new talent that came through on tour.

“I have been actively involved over the last three years working with the youth programmes to ensure that Cricket Ireland continues to have highly skilled female cricketers transitioning into the Senior Programme. It was very pleasing to see some of these players starting to step up into the senior team and perform well,” he said.

“Cara Murray, Vanessa Kelada and Anna Kerrison were all given their chance and I was proud of what I saw. I was particularly impressed with Cara, the way she handled herself for a young leg-spinner, and I hope she kicks on.”

While most of the squad return to Dublin on Friday morning, three senior players will fly to Australia to continue their cricketing activities:

• Mary Waldron heads to Adelaide to join up with Port Adelaide Cricket Club. She will also continue her education and experience umpiring through the South Australian Cricket Association Umpires programme.
• Isobel Joyce will resume the season in Hobart playing for the Tasmanian Roar.
• Ciara Metcalfe will return to Brisbane where she plays and coaches with Wynnum-Manly Cricket Club.

Kim Garth, who was also scheduled to play on in Australia, is currently undergoing rehabilitation work in Melbourne after sustaining an injury during the Women’s Big Bash League of which she was part of the title-winning Sydney Sixers team.

“It serves Irish cricket well with our players getting experience overseas. Being able to adapt and play in a range of conditions is so important in the international game,” said Hamilton.

“After a short break the squad will re-group and prepare for an important summer ahead which includes the World Cup T20 Qualifying tournament in The Netherlands.”

The Ireland Women’s team is currently 10th in the world on the ICC Women’s Team Rankings.