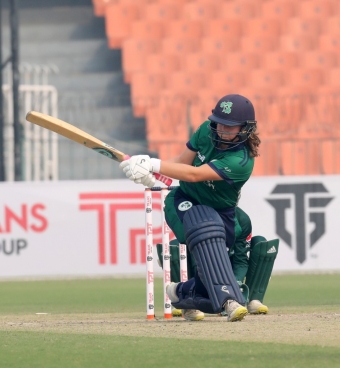 LAHORE, Pakistan – Despite Ireland Women scoring their highest total of the series - which included an assured 65 from opener Leah Paul - Pakistan completed a One-Day International series clean sweep with a five-wicket victory in Lahore today.

Winning the toss again and electing to bat first, with an unchanged XI from the previous two matches, Ireland made a much more promising start with the bat. Leah Paul and Gaby Lewis batted cautiously as they built a foundation for the visitors, finishing the powerplay on 37 for no loss.

The pair denied Pakistan a breakthrough until the 22nd over, by which time the Irish openers had advanced the score to 84.

Lewis was the first wicket to fall, looking to cut a short delivery from Fatima, but getting a thick edge through to the keeper. Paul continued to accumulate, reaching her third ODI half-century off 76 deliveries - the pressure taken off her thanks to an aggressive display from Amy Hunter at No.3 who scored a quickfire 41 that included seven fours.

Laura Delany and Eimear Richardson put on a rapid 41-run stand in six overs – taking Ireland beyond 200, but on 28, Richardson mistimed a pull shot from Fatima and was out in the 44th over. From there, wickets fell rapidly as Fatima completed her five-for when Delany was stumped for 18. Ireland were bowled out for 225 from the penultimate ball of the innings.

Orla Prendergast boosted Irish hopes early in the chase as she removed Muneeba Ali for just 12. Jane Maguire then claimed the vital wicket of Sidra Ameen, the opener out for the first time in the series. With Ireland sensing the opportunity of a first women’s ODI victory against Pakistan in 19 years, progress was halted by home captain Bismah Maroof as she scored a composed fifty to calm any nerves in her team.

With the match looking like it was drifting towards a Pakistan win, Rachel Delaney made the breakthrough in her first over, straight after the drinks break, with Prendergast taking a good catch diving forward. Ireland’s hopes were further bolstered by Richardson drawing Shamas out of her crease just a few overs later with Waldron claiming her 49th ODI dismissal with the stumping. Pakistan found themselves 163-4 with 15 overs left.

The game now looked set for a tight finish, but Aliya Riaz and Omaima Sohail gradually guided Pakistan towards their target. Riaz was dismissed by Richardson with Pakistan still needing thirty, but that dismissal alone couldn’t stop Pakistan from claiming the match by five wickets.

The two sides will now gear up for the three-match T20I series due to start this Saturday at the same venue.