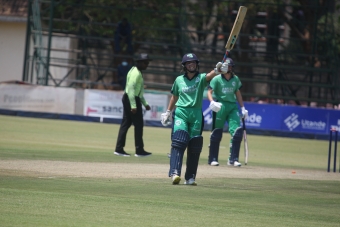 HARARE, Zimbabwe – Opener Leah Paul hit a career-best 95 as Ireland Women registered its second-highest ever team total in One-Day International cricket, with the Irish bowlers ensuring victory by 80 runs over Zimbabwe to square the series at 1-1 with two games to play.

22-year old Paul, playing in just her sixth ODI, struck eight boundaries in a patient 118-ball knock using timing and placement to great effect. Her runs came all around the wicket, with a particular feature of her innings being her ability to seemingly turn the strike over at will. Of her 95 runs, she scored 38 singles and 11 twos on a pitch that seemed to reward patience and good judgement – with Paul continually picking off the bowling while waiting for the right ball to punish.

Paul combined with fellow opener Gaby Lewis (65) in what ended up a match-defining partnership. Their opening stand of 135 runs – the sixth highest partnership in ODI cricket for Ireland Women – laid solid foundations for the middle order to build upon.

Lewis, who had taken the reins as lead aggressor early, brought up her maiden ODI half-century in the 20th over with the pair’s 100-run partnership coming in same over. Paul followed suit four overs later with her maiden ODI half-century, and as the pair embraced in celebration in the middle of the pitch, Ireland looked in an indomitable position.

However, two quick wickets fell shortly after – Lewis bowled and Amy Hunter (1) adjudged leg before wicket – but just as soon as Zimbabwe sniffed a way back into the contest captain Laura Delany combined with Paul for a 67-run stand to push Ireland over the 200-mark.

Delany fell for 35 looking to push the run rate on, while Paul unluckily fell caught behind off Precious Marange getting a edge to a ball wide down leg side, with Zimbabwean keeper Modester Mupachikwa taking a smart diving catch.

Orla Prendergast (23) and Shauna Kavanagh (34) added late runs and Ireland Women finished on 286-7 from their 50 overs.

International debutant Jane Maguire was handed the new ball and was immediately hitting the mark with a tight line and length. The Hills medium-paced bowler combined well in opening combination with the left-arm spin of Paul to tie down the home side’s openers. With the score 21-0 in the 11th over, the pressure eventually took its toll, as Kavanagh smartly ran out Mupachikwa (14) and Cara Murray (3-56) grabbed two key wickets, including that of the Zimbabwean captain and centurion from the last match Mary-Anne Musonda - the score stood at 74-4 after 25 overs with Zimbabwe’s innings looking increasingly adrift.

Despite a valiant half-century from Josephine Nkomo (70* off 86 deliveries), Zimbabwe finished their innings 206-9 as Ireland levelled the series 1-1 with two games remaining in the series.

The two sides meet again at the same venue on Saturday for the third ODI.