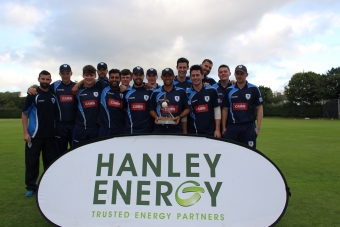 Leinster Lightning claimed the Hanley Energy T20 Trophy as they beat Munster Reds by five wickets at The Mardyke.

Chasing a modest 119 for victory, Lightning openers Gareth Delaney and Stephen Doheny got their side off to a rapid start as they added 59 in just 34 balls.

Yaqoob Ali (3-25) and Gary King (2-23) combined to produce a late wobble, but Max Sorensen’s 13 not out ensured a comfortable five-wicket win with 6.2 overs remaining.

Stephan Grobler top scored with 36, while Jack Tector made 26 - both hitting 3 fours and one maximum - but the home side never put together a significant partnership as they were dismissed for 118.

“I’m delighted with the win, very happy with the performance this evening,” said Leinster Lightning skipper John Anderson. “I was particularly pleased with how the youngsters performed. Josh Little took three wickets in a great spell of bowling.

“Then the two openers took the game away from Munster, Stephen Doheny and Gareth Delany who both struck the ball very cleanly. That was very pleasing seeing the way the two youngsters dominated the match.

“It’s fantastic we’ve claimed another trophy and hopefully we can make it a clean sweep when we play our remaining Championship matches.”

“We are delighted to be able to sponsor the Hanley Energy interpros. I’ve particularly enjoyed the rise of this series over the past four years, and with Munster now joining the group, we feel it is really encompassing the whole of Ireland. It’s really given cricketers all over Ireland an opportunity to participate in this fantastic competition.”

Meanwhile in Belfast, James Shannon hit a brilliant 62 as the Northern Knights beat the NW Warriors by six wickets in a relatively low-scoring affair.

The Knights skipper hit four sixes as he top scored with 62 from just 43 balls as he team successfully chased 124 for victory - albeit securing the win with just five balls to spare.

Shannon shared a stand of 55 in 58 balls with Lisburn’s Adam Berry, who made 24.

Earlier the Warriors had struggled to break the shackles of the Knights attack, hitting only 6 fours and 2 sixes in their 20 overs as they posted 123 for 4.

Opener David Barr top scored with 41, but was only able to find the boundary once in his 48-ball stay. Stuart Thompson hit 27 not out, while David Rankin made 23. Gary Kidd (2-19) was the best of the Knights bowlers.

Despite the loss, the Warriors finished second on 14 points, behind winners Lightning who has 23. The Knights ended on 13 points, while Munster were bottom on two points.

The T20 trophy takes Leinster’s haul to 12 across all formats in the five year history of the revamped inter-pro series, and they will get the opportunity to make it 13 when they play their remaining two Championship games, starting with an away trip to the Warriors on August 30th.

At The Mardyke, Leinster Lightning beat Munster Reds by 5 wickets