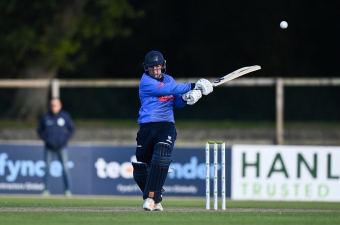 Curtis Campher on his way to 59*

DUBLIN – Leinster Lightning completed a title clean-sweep of the Test Triangle Inter-Provincial Series this season, after defeating the visiting North West Warriors today in a closely fought encounter at Malahide.

The Leinster side had wrapped up the domestic T20 competition last month, and today officially claimed the 50-over Cup competition – completing both competitions without a loss.

The match started promptly at 10.15am, after Warriors captain Andy McBrine chose to bat after winning the toss. However, after losing opener Nathan McGuire on the 9th ball of the innings, the game was halted shortly after for an extended rain break.

With the resumption of play at 2.15pm, and with a game reduced to 32-overs a side, the Lightning kept the early pressure up. They removed Will Smale (7), William Porterfield (17) and Andy McBrine (6), with the Warriors reduced to 37-4 in the 14th over.

Stuart Thompson (36) and Graham Hume (36) then came together and firstly stabilised the innings then accelerated the scoring in a 67-run partnership. Thompson, who had made just 3 runs in his one innings this series, was in bullish form, dispatching Simi Singh over the square leg fence for six and striking three lofted fours, but on 36 he slashed at a wide ball from Curtis Campher and feathered a catch through to Lorcan Tucker. Image: Graham Hume punches a ball through the off side

Graham Hume was desperately searching for a partner to build some form of momentum towards the end of the innings, but Graham Kennedy (2) and Ross Allen (3) followed Thompson back to the pavilion in short order, and then Hume himself - trying to force the pace - fell to a diving catch by Kevin O’Brien at mid off with the score on 124 in the 30th over.

The Warriors finished their innings on 132-8 from their 32 overs – the target for the Lightning, however, which was adjusted down to 132 on DLS.

For the Lightning bowlers, once more Singh was a stand out, taking 3-27 – taking his series tally to 10 wickets at an average of 13.7, the highest wicket-taker of the Series. Campher’s 2-23 saw him finish the competition’s second highest wicket-taker with eight scalps at 16.25.

In need of an inspired bowling performance to restrain the in-form Lightning batting line-up, the Warriors made the perfect start removing Kevin O’Brien and Jack Tector, both without scoring. The Warriors opening bowling attack of Hume and Craig Young had their tails up, and the chat amongst the fielders noticeably lifted, and the visitors were rewarded a third time soon after when Tucker (14) flashed at a wide ball and was caught behind.

Stephen Doheny (33) was then joined by Campher (59*) and the pair counter-attacked with a 53-run partnership. Doheny, the Series highest run-scorer, looked confident at the crease until he lofted a ball from Varun Chopra to Thompson. He finished the Series with 142 runs at 35.5.

Simi Singh (15) joined Campher for a 36-run stand, and looked to be cruising to victory, but at 113-4 Singh fell, followed quickly by Greg Ford (0) and Tyrone Kane (3). While the Lightning were wobbling, it came down to Campher – who brought up his first half-century for Leinster Lightning off 47 balls – and captain George Dockrell (8*) to guide their side home, ending on 133-7 from 26.2 overs.

This was the seventh straight 50-over Cup title won by the Lightning in eight years since the competition began, and possibly the most dominant all-round performance. Image: The victorious side

We talk to Leinster Lightning Head Coach Nigel Jones who looks back on a trophy clean-sweep of a season.#IP2020 | #GreenBall  pic.twitter.com/TGvvfOH8bp

We talk to North West Warriors Head Coach Ian McGregor who looks back on a season where the weather certainly did not help his side.#IP2020 | #GreenBall  pic.twitter.com/lgR4kJSnXr