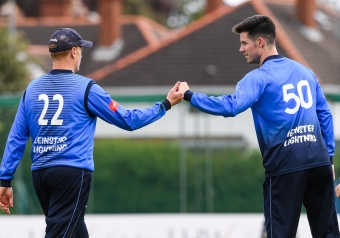 DUBLIN – Leinster Lightning were crowned Test Triangle Inter-Provincial T20 Trophy champions for a sixth time this afternoon after they beat the Northern Knights by five wickets at Sydney Parade.

Lightning captain George Dockrell won the toss, electing to bowl and the home side didn’t have to wait long for their first wicket as Ross Adair (4) top-edged to a diving Kevin O’Brien off the bowling of Peter Chase in the first over.

Just like in their victory over the North West Warriors in Comber on Tuesday, it was the Irish international duo of James McCollum and Harry Tector that got their side back on track, bringing the Knights up to 45-1 after five overs.

McCollum (17), who posted his highest career Twenty20 score of 79* earlier this week, was again looking in good touch, ramping a boundary off Curtis Campher before hitting James Newland for a mammoth six, but he then mistimed one into the hands of a waiting O’Brien to give Tyrone Kane his first wicket. That started a Knights collapse with Tector (24) following in the next over while captain Gary Wilson (4), Mark Adair (1) and Ruhan Pretorius (7) were all back in the tent before the halfway stage with the score sitting at 65-5.

Simi Singh was the main cause of the Knights damage, picking up three wickets within his first eight balls and would eventually end with figures of 3-14 from four overs.

CJ van der Walt (18), batting for the first time in Inter-Provincial cricket, contributed before a ninth-wicket partnership of 27 between David Delany (16) and Jacob Mulder (14) helped bring the Knights up to 128.

They were all out off the final ball of the innings after two run outs from O’Brien in as many balls, leaving the hosts needing 129 for victory.

O’Brien has started the Inter-Provincial season in fine form and was threatening to go big once again, reaching 19 from just 10 balls, but he was then well caught by Pretorius off the bowling of Josh Manley, who was making his first appearance due to the absence of Graeme McCarter.

Stephen Doheny (12) followed soon after when he was run out via a direct hit from Tector and the 20-year-old almost pulled off a magical catch to get rid of international team-mate Campher a few balls later but couldn’t quite hold on.

Campher, who emerged as the latest star of Irish cricket in the recent ODI series against England, got his innings up and running with a huge six off Pretorius but it was the bowler who would have the last laugh as he holed out to Mulder in the deep.

Lorcan Tucker top-scored in Leinster’s win over Munster on Tuesday and was once again holding the innings together, batting patiently and had reached 20 from 26 balls when he danced down the wicket and missed the leg-spin of Mulder before he was stumped by Wilson.

After his heroics with the ball in hand, it was also Singh that was the thorn in the Knights side on the batting front. Lightning were struggling to find the boundary rope until Singh struck a straight six before a classy reverse sweep brought the Dubliners within touching distance of victory.

Despite Delany bowling Tyrone Kane (12), it was too little, too late for the Knights and it was fittingly Singh (39* from 34 balls) that was in the middle as Leinster secured yet another piece of silverware with seven balls to spare.

They regain the title they lost to the Knights last season, adding to the six Inter-Provincial Championship and six Inter=Provincial Cup crowns they have won since 2013.

A scheduled double-header between North West Warriors and Munster Reds at North County was called off due to a wet outfield with both teams receiving four points.

All teams will finish their Trophy campaign on Tuesday before the 50-over Cup gets underway on Thursday at Shaws Bridge and Bready respectively.